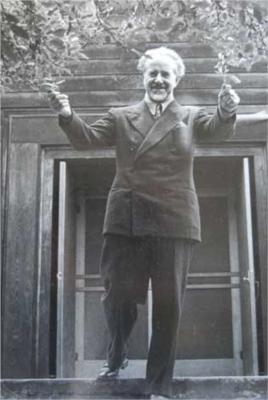 Mark George Tobey (December 11, 1890 – April 24, 1976) was an American painter. His densely structured compositions, inspired by Asian calligraphy, resemble Abstract expressionism, although the motives for his compositions differ philosophically from most Abstract Expressionist painters. His work was widely recognized throughout the United States and Europe. Along with Guy Anderson, Kenneth Callahan, Morris Graves, and William Cumming, Tobey was a founder of the Northwest School. Senior in age and experience, he had a strong influence on the others; friend and mentor, Tobey shared their interest in philosophy and Eastern religions. Similar to others of the Northwest School, Tobey was mostly self-taught after early studies at the Art Institute of Chicago. In 1921, Tobey founded the art department at The Cornish School in Seattle, Washington.

Tobey was an incessant traveler, visiting Mexico, Europe, Palestine, Israel, Turkey, Lebanon, China and Japan. After converting to the Bahá'í Faith, it became an important part of his life. Whether Tobey's all-over paintings, marked by oriental brushwork and calligraphic strokes, were an influencer on Jackson Pollock's drip paintings has been left unanswered. Born in Centerville, Wisconsin, Tobey lived in the Seattle, Washington area for most of his life before moving to Basel, Switzerland in the early 1960s with his companion, Pehr Hallsten; Tobey died there in 1976.

Tobey was the youngest of four children in a Congregationalist family. His parents were George Tobey, a carpenter and house builder, and Emma Cleveland Tobey. The father carved animals from stone and sometimes drew animals for young Mark to cut out with scissors. In 1893, the family settled in Chicago. He studied at the Art Institute of Chicago from 1906 to 1908, but, like others of the Northwest School, was mostly self-taught. In 1911, he moved to New York City where he worked as a fashion illustrator for McCall's. His first one-man show was held at Knoedler & Company in lower Manhattan, in 1917. The following year, Tobey came in contact with New York portrait artist and Bahá'í Juliet Thompson—an associate of Khalil Gibran—and posed for her. During the session, Tobey read some Bahá'í literature and accepted an invitation to Green Acre where he converted to the Bahá'í faith. His conversion led him to explore the representation of the spiritual in art. In the following years, Tobey delved into works of Arabian literature and teachings of East Asian philosophy.

Tobey's arrival in Seattle in 1921 was in part an effort for a new start following a marriage and quick divorce. When his ex-wife found Tobey's address, she sent him a box of his clothes topped with a copy of Rudyard Kipling's The Light That Failed. In the following year, Tobey met Teng Kuei, a Chinese painter and student at the University of Washington, who introduced Tobey to Eastern penmanship, beginning Tobey’s exploration of Chinese calligraphy. The beginning of his lifelong travels occurred in 1925 when he left for Europe, settling in Paris where Tobey met Gertrude Stein. He spent a winter at Châteaudun, and also traveled to Barcelona and Greece. In Constantinople, Beirut and Haifa, he studied Arab and Persian writing.