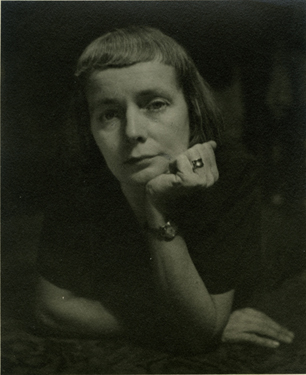 Betty Parsons was an American artist, art dealer and collector known for her early promotion of Abstract Expressionism.

Betty Bierne Pierson was born on January 31, 1900, the second of three daughters. She came from a wealthy New York family that divided its time between New York City, Newport, Palm Beach, and Paris.

At the age of ten, Parsons was enrolled in Miss Chapin's school for girls in New York. She remained at the Chapin School for five years but was a mediocre student who was easily bored. In 1913, Parsons visited the Armory show, the International Exhibition of Modern Art. She was delighted and inspired by what she saw and described this pivotal moment years later: "It was exciting, full of color and life. I felt like those paintings. I couldn't explain it, but I decided then that this was the world I wanted... art." Although her parents disapproved, she soon began studying art in the studio of Gutzon Borglum, whom she described as a poor teacher.

In 1919, Parsons married Schuyler Livingston Parsons, an affluent, New York City socialite ten years her senior. Her family hoped that Parsons would settle down into a conventional lifestyle, but the couple divorced in Paris only three years later on the grounds of incompatibility. Parsons remained in Paris and enrolled in the Académie de la Grande Chaumière, where she studied under the sculptors Émile-Antoine Bourdelle (formerly an assistant to Auguste Rodin) and Ossip Zadkine. In the summers, she studied painting with Arthur Lindsey on the coast of Brittany. She bought a small house in Montparnasse where she lived with English artist Adge Baker, with whom she had a romantic relationship. The two separated in 1932 but remained lifelong friends.

In 1933, after losing her money in the Great Depression, Parsons returned to America. She first traveled to Santa Barbara, California, where she taught sculpture classes for a short time. In 1936, she moved back to New York and had her first solo exhibition in New York at Midtown Gallery. Her watercolor paintings were well-received, and referred to in one review as "delightful" and "interestingly conceived". She would have nine more one-woman shows at Midtown over the next twenty years.

Following her one-woman show at the Midtown Galleries, owner Alan Bruskin offered Parsons her first gallery job: selling art on commission. That position was short-lived and, in the fall of 1937, Parsons began working at the gallery of Mrs. Cornelius J. Sullivan, a founding trustee of the Museum of Modern Art, New York.

In 1940, Parsons left Sullivan's gallery and took a position managing a contemporary gallery in the Wakefield Bookshop at 64 East 55th Street. This was her first job managing a gallery on her own; she had full curatorial control regarding artists and exhibitions. She was soon representing many contemporary artists, including Saul Steinberg, Adolph Gottlieb, Alfonso Ossorio, Hedda Sterne, Theodoros Stamos, and Joseph Cornell.

In September 1944, after four years at the Wakefield Gallery, Parsons was invited to start and manage a contemporary art division in the gallery of art dealer Mortimer Brandt. When Brandt moved to England after the war, Parsons subleased the space from him and opened her own gallery at the urging of her artists.