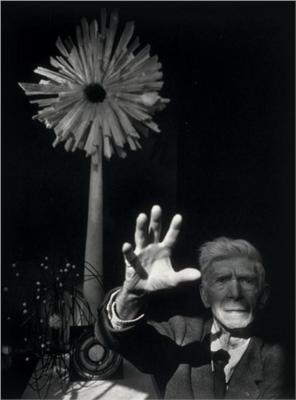 Ossip Zadkine (Russian: Осип Цадкин; 4 July 1890 – 25 November 1967) was a Russian-born artist who lived in France. He is primarily known as a sculptor, but also produced paintings and lithographs.

Zadkine was born on 4 July 1890 as Yossel Aronovich Tsadkin (Russian: Иосель Аронович Цадкин) in the city of Vitsebsk, part of the Russian Empire (now Belarus). He was born to a Jewish father and a mother named Zippa-Dvoyra, who he claimed to be of Scottish origin. Ossip had 5 siblings: sisters Mira, Roza and Fania and brothers Mark and Moses.

After attending art school in London, Zadkine settled in Paris in 1910. He studied at the Ecole des Beaux-Arts for six months. In 1911 he lived and worked in La Ruche. While in Paris he joined the Cubist movement, working in a Cubist idiom from 1914 to 1925. He later developed his own style, one that was strongly influenced by African and Greek art.

1921 he obtained French citizenship. Zadkine served as a stretcher-bearer in the French Army during World War I, and was wounded in action. He spent World War II in the US. His best-known work is probably the sculpture The Destroyed City (1951-1953), representing a man without a heart, a memorial to the destruction of the center of the Dutch city of Rotterdam in 1940 by the German Luftwaffe.

In August 1920, Zadkine married Valentine Prax (1899—1991), an Algerian-born painter of Sicilian and French Catalan descent. They had no children.

Zadkine had a wartime relationship with American artist Carol Janeway while living in self-exile in Manhattan 1942-1945. He created several portraits of her.

Zadkine was a friend of Henry Miller and was represented by the character Borowski in Miller's Tropic of Cancer.

The artist's only child, Nicolas Hasle (born 1960), was the result of his affair with a Danish woman, Annelise Hasle. Since 2009, Hasle, a psychiatrist, who was acknowledged by the artist and had his parentage legally established in France in the 1980s, has been party to a lawsuit with the City of Paris to establish his claim to his father's estate.

Zadkine died in Paris in 1967 at the age of 77 after undergoing abdominal surgery and was interred in the Cimetière du Montparnasse. His former home and studio is now the Musée Zadkine.

There is also a Musée Zadkine in the village of Les Arques in the Midi-Pyrénées region. Zadkine lived in Les Arques for a number of years, and while there, carved an enormous Christ on the Cross and Pieta that are featured in the 12th-century church which stands opposite the museum.

Among the public collections holding works by Ossip Zadkine are: