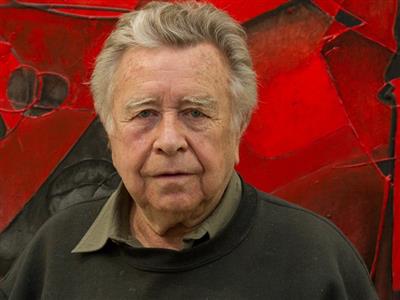 Manuel Felguérez Barra (born December 12, 1928) is a prominent abstract artist of Mexico, part of the Generación de la Ruptura which broke with the muralist movement of Diego Rivera and others in the mid 20th century. Felguérez was born in Zacatecas in 1928, but political instability caused his family to lose their land there and move to Mexico City. In 1947, he had the chance to travel to Europe and impressed with the art there, decided to dedicate himself to the vocation. Unhappy with the education at the Academy of San Carlos in Mexico, he did most of his studies in France, where he specialized in abstract art, something that was not accepted in Mexico at the time. His exhibitions were initially limited to galleries and the production of "sculpted murals" using materials such as scrap metals, stones and sand. As attitudes in Mexico changed towards art, Felguérez found acceptance for his work and remains active at over eighty years of age.


Manuel Felguérez was born on his family’s San Agustín del Vergel hacienda near Valparaíso, Zacatecas in 1928. It was a turbulent time as Zacatecas was involved in the Cristero uprising and while the fighting initially began over religion, it quickly become about land as well. His father owned the family hacienda, the great great grandson of landholders, but by the early 20th century, these landowners were despised by the general populace. Various of the hacienda’s workers demanded control of the land by force, with battles between loyalists and the insurgents on the property. In the 1930s, there were land expropriations under Lázaro Cárdenas, which took away most of the family’s holdings. The family decided to flee and later completely abandon the hacienda in 1934 for Mexico City. Felguérez’s father hoped for compensation for the lost lands from the federal government, but he died after a year when Felguérez was only eight years old. Felguérez’s mother never returned to Zacatecas, warning her son that if he ever returned to Valparaíso, they would kill him, and she also preferred to be with her parents in the capital city. Felguérez would return about six decades later to Zacatecas for the first time to open an art museum named after him.


Felguérez grew up with his mother and her family, which owned the Ideal Theater on Dolores Street in Mexico City. The change from rural farm life to city life was essential to his development. The family had a number of financial downturns, first losing the theatre then losing a grocery store they opened after only two years, making the family poor. There was pressure to join gangs and rob, he liked to box and see lucha libre at the Arena México and tried marijuana in his youth (he favors its legalization today). However, he received his primary, secondary and high school education through the Marists and was a Boy Scout from age eight to age twenty three with his best friend Jorge Ibargüengoitia . The Scouts encouraged him to read authors such as Dostoyevsky and G. K. Chesterton and took hiking trips including one to Iztaccíhuatl .