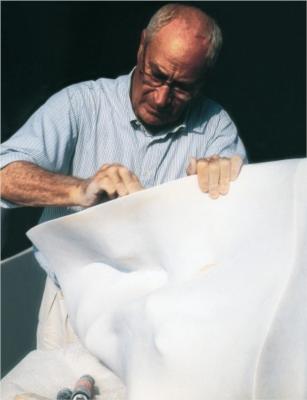 Giò Pomodoro [ˈdʒɔ ppomoˈdɔːro] (1930-2002) was an Italian sculptor, printmaker, and stage designer. In 1954 he moved to Milan, where he associated with leading avant-garde artists and started making jewelry. He then began to produce reverse reliefs in clay and also formed assemblages of various materials, including wood, textiles, and plaster subsequently cast in metal.

During the 1960s, he developed several series of sculptures, which explored a range of abstract shapes, usually with smooth undulating surfaces. In his later career, Pomodoro regularly received public commissions and produced a number of large outdoor structures.

His brother is the sculptor Arnaldo Pomodoro.