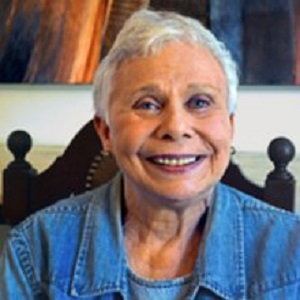 Rochelle Blumenfeld was born in Pittsburgh, PA in 1936. Her grandparents were immigrants from the Soviet Union. Her father, Lawrence Reznik, was a sign painter, also making window displays. Blumenfeld's grandfather, Harry Fairman, was an artist and a decorator for the wealthy neighborhoods in the East End of Pittsburgh. He encouraged her to start painting and inspired her to pursue art.

Blumenfeld started taking art classes at the Carnegie Museum starting in 5th grade. In High School, she took an advanced art class in painting at the Carnegie Tech, which later became known as Carnegie Mellon University. After graduation, she applied and was accepted as a Painting and Design student at Carnegie Mellon University. She completed one year and left the university to get married. Blumenfeld missed painting, and she enrolled in a class at the Young Men and Women's Hebrew Association, which was taught by Samuel Rosenberg (artist), who also taught Andy Warhol. Samuel Rosenberg was a big influence on her future as a painter.

Rochelle Blumenfeld married Irving Blumenfeld in 1955. He was a co-founder of Gateway Paint Company in the Strip district of Pittsburgh. Together they had 3 children and 5 grandchildren.

Samuel Rosenberg (artist) introduced Blumenfeld to the world of abstract art. She was inspired by life around her to reflect and make statements in her paintings. Blumenfeld used bold colors, light, and movement in her art to express herself. She was inspired by the natural shapes of the world around her, and paintings represent a period of changes. The artist stated "Life continually alters its course on an unknown journey, and coping is not always easy".

In 1958, Rochelle Blumenfeld started exhibiting professionally, when she was accepted into the Associated Artists of Pittsburgh. This started a long career of exhibiting her work through the United States and Europe.

In the 1970s Rochelle Blumenfeld had a one-person show at the Carnegie Museum of Art. In 1976 her paintings were included in the Bicentennial Exhibition, “Americans in Paris”, Paris, France. Blumenfeld showed her work with the Associated Artists of Pittsburgh in Dunfermline Scotland to honor Andrew Carnegie at his birthplace.

In the 1990s, Blumenfeld started a series of paintings representing Jewish holidays and Shabbat. Some of her Judaica paintings were included in the Hallmark Cards "Tree of Life" series in 1999.

In 2000, Blumenfeld was inspired by seeing Revelations (Alvin Ailey), Alvin Ailey American Dance Theater. She wanted to keep and share her memories of the dance, which started a series of paintings she named "Celebration of Spirit". In 2004, in conjunction with the Three Rivers Arts Festival, she had a one-person show of her ballet paintings at the One Oxford Centre in Pittsburgh.,