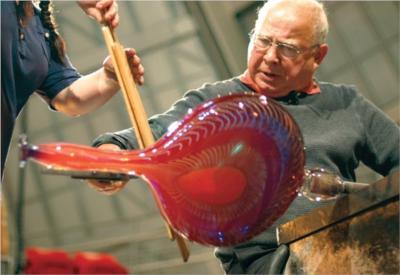 Lino Tagliapietra is an Italian glass artist, with a distinctive, hard-to-classify style that recalls abstract (and especially op) art.

Tagliapietra was born on the island of Murano in 1934. Murano, an island whose history of glass dates back to 1291, provided Tagliapietra an ideal educational environment to develop his techniques and glass artistry. At the age of 12 he was apprenticed by the glass maestro Archimede Seguso. Nine years later, at the age of 21, he earned the rank of maestro.

For the next 25 years Tagliapietra worked in association with a number of Murano's top glass factories, including Vetreria Galliano Ferro, Venini & C., La Murrina, Effetre International and EOS Design nel Vetro. His influence on the American art glass studio movement is primarily attributed to his colleague Dale Chihuly. In 1968 Chihuly visited Murano and learned from Tagliapietra, as well as other glass maestri, including Pino Signoretto.

In 1979 Tagliapietra travelled to the United States to teach at the Pilchuck Glass School in Washington. This event marked the beginning of knowledge sharing amongst the American Glass Artists and the Italian maestros, who in the past had guarded their techniques as valuable trade secrets.

The 1980s marked Lino's entry into the studio artist world after over a decade of traveling, teaching and working with studio artists worldwide.

Lino Tagliapietra (born 1934) is a Venetian glass artist who has also worked extensively in the United States. As a teacher and mentor, he has played a key role in the international exchange of glassblowing processes and techniques between the principal American centers and his native Murano, "but his influence is also apparent in China, Japan, and Australia—and filters far beyond any political or geographic boundaries."

Tagliapietra was born August 10, 1934 in an apartment on the Rio dei Vetri in Murano, Italy, an island with a history of glass-making that dates from 1291. It provided an ideal educational environment for Tagliapietra to develop his techniques and glass artistry. On June 16, 1946, at the age of 12, he was apprenticed to the glass maestro Archimede Seguso. He began in the Gagliano Ferro factory as a water carrier and after two years was allowed to participate in glass manufacturing for the first time, applying ribbing to a single piece. He educated himself in modern art and at the Venice Biennales saw the work of Mark Rothko, Barnett Newman, and Ellsworth Kelly. For the history or glass art he used the local resources of the Murano Glass Museum, and his attempts to recreate historical models expanded his vocabulary as well. Nine years later, at the age of 25, he earned the rank of maestro. He interrupted his years of training to complete his compulsory service in the Italian military in 1952-54. On 13 September 1959 he married Lina Ongaro, whose family had been involved in Venetian glass production for centuries.

For the next 25 years Tagliapietra worked in association with several of Murano's most important glass factories, including Vetreria Galliano Ferro, Venini & C., La Murrina, Effetre International, where he was Artistic and Technical Director from 1976 to 1989, and EOS Design nel Vetro. At Murrina he developed his "Saturn" design, which became his "personal emblem". His influence on the American art glass studio movement is primarily attributed to his colleague Dale Chihuly. In 1968 Chihuly visited Murano, where he gave Tagliapietra studio time to develop his own pieces. He taught Tagliapietra his techniques, which Tagliapietra taught to other glass maestri, including Pino Signoretto, and Taglipietra taught Chihuly the Venetians' secrets in turn. A 2001 film documents this collaboration: Chihuly and the Masters of Venice.

Tagliapietra taught workshops at La Scuola Internazionale del Vetro (Murano) in 1976, 1978, and 1981, where artists and blowers worked on an equal footing. In 1979 and 1980, he taught at the Pilchuck Glass School in Washington state, which initiated an ongoing exchange of knowledge between the Italian maestri and American glass artists, groups that in the past had guarded their techniques as trade secrets. He has returned to Seattle and Pilchuk repeatedly.

In the 1980s, Tagliapietra transitioned from traveling, teaching, and designing for commercial glass manufacturers to creating individual pieces of art as an independent studio artist. He had his first solo show at Traver Gallery in Seattle in 1990. His technical resources continuously expanded to combine modern experimentation "carving, blowing, caning, layering, casing, and trailing along with the elaborate Italian tricks so sought after for centuries: battuto, zanfirico, filigrano, reticello, pulegoso, martelé, inciso and incalmo..." He has emphasized his own independent approach to design. He told one interviewer: "I'm totally open. I think that what I like to do the most is research. I don't want to represent Venetian technique only–even though I was born with it.... Your style is what you are. My older work has a different spirit and my expression has changed."