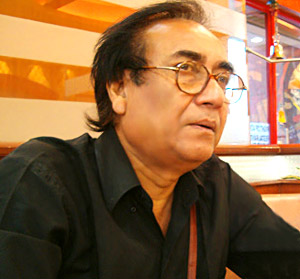 Jahar Dasgupta, (born 1942) is an eminent and contemporary painter from 21st century India.

Jahar Dasgupta (born in Jamshedpur 1942) is an Indian painter. His childhood spent in Jamshedpur where at the small age he used to draw elephants, dogs, trees on the floor. Later their family moved to Dhanbad due to his father Mr. Narendranath Dasgupta who worked in TISCO in an executive post left the job and joined Central Institute of Mining and Fuel Research institute as a scientist. At the age of 9 he draw Stalin face and Ma Sarada Devi on the wall. This took the attention of his parents and they decided to send him in some art school. In 1960 he was admitted to Visva-Bharati University at Santiniketan, the place of Rabindranath Tagore. That was a turning point in his life. In Kala Bhavana, he took his primary lessons under mentors like Nand Lal Bose, Ramkinkar Baiz and Benode Behari Mukherjee. In 1964, he obtained diploma from Kala Bhavana.

His first job was an art teacher in a non Bengali school in North Calcutta where he served for many years. In his struggling time, he also took many art tuitions to run his family. Simultaneously he continued to participate art shows regularly.

Jahar Dasgupta had developed his individual style in paintings and drawings. Previously he has painted in oil medium and now he mainly works in ink, pastel and acrylic colour.

In 1969, a few kind souls, total seven ex-students of Santiniketan like Jahar and Baroda Art College students came together to form a group named Painters' Orchestra, now one of the oldest artist groups in India. Since that time Jahar Dasgupta is regular participant in the group shows of this organisation and also went for few solos as well. His first solo exhibition was organised in Birla Art and Culture Kolkata, West Bengal. He developed his own style of expression since the beginning of 1970-s after passing through a period of apprenticeship during 1960-s. In this sense he may be categorised as an artist of 1970-s.