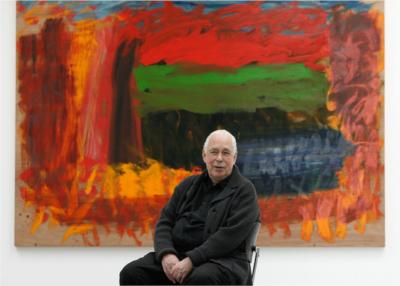 Howard Hodgkin is one of the most acclaimed contemporary abstract artists. In 1984, Hodgkin represented Britain at the Venice Biennale, in 1985 he won the Turner Prize, and in 1992 he was knighted.

Sir Gordon Howard Eliot Hodgkin CH CBE (6 August 1932 – 9 March 2017) was a British painter and printmaker. His work is most often associated with abstraction.

Gordon Howard Eliot Hodgkin was born on 6 August 1932 in Hammersmith, London, the son of Eliot Hodgkin (1905–1973), a manager for the chemical company ICI and a noted amateur horticulturist, and his wife Katherine, a botanical illustrator. During the Second World War, Eliot Hodgkin was an RAF officer, rising to Wing Commander, and was assistant to Sefton Delmer in running his black propaganda campaign against Nazi Germany.

His maternal grandfather Gordon Hewart, 1st Viscount Hewart was a journalist, lawyer, MP and Lord Chief Justice; and the scientist Thomas Hodgkin was his great-great-grandfather's older brother. Hodgkin was a cousin of the English still life painter Eliot Hodgkin (1905–1987),

During the Second World War, Hodgkin was evacuated with his mother and sister to the USA, where they lived on Long Island, New York. On returning, he was educated at Eton College and then at Bryanston School in Dorset. He had decided on a career in art in early childhood and ran away from school to pursue this.

He studied at the Camberwell Art School and later at the Bath Academy of Art in Corsham, where Edward Piper studied drawing under him.

Hodgkin's first solo show was in London in 1962.

In 1980, Hodgkin was invited by John Hoyland to exhibit work as part of the Hayward Annual at the Hayward Gallery along with Gillian Ayres, Basil Beattie, Terry Setch, Anthony Caro, Patrick Caulfield, Ben Nicholson and others.

Hodgkin was invited to design a mural for the front of Charles Correa's 1992 headquarters for the British Council in India. Hodgkin's mural is of a banyan tree spreading its branches across the walls. It is a symbol of the British Council's work rooted in the Indian cultural scene. Hodgkin said of Correa: “Charles Correa is the most perfect architect you could imagine. He first suggested that I think about the mural as an Indian flag turning into a Union Jack. I said no.”

In 1995, Hodgkin printed the Venetian Views series, which depict the same view of Venice at four different times of day. Venice, Afternoon – one of the four prints – uses 16 sheets, or fragments, in a hugely complex printing process that creates a colourful, painterly effect. This piece was given to the Yale Centre of British Art in June 2006 by its Israeli family owners in order to complement the museum's already-impressive collection of Hodgkins.

A major exhibition of his work was mounted at Tate Britain, London, in 2006. Also in 2006, The Independent declared him one of the 100 most influential gay people in Britain, as his work has helped many people express their emotions to others.