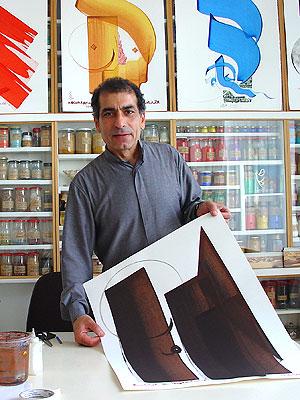 Hassan Massoudy is considered by the French writer Michel Tournier as the "greatest living calligrapher". He currently lives in Paris.

Hassan Massoudy was born in 1944 in Najaf. He grew up in a traditional society. He moved to Baghdad in 1961, where he learned classic Arabic calligraphy.

After arriving in Paris in 1969, he entered the “Ecole des Beaux-Arts” where he studied figurative painting. But he did not stop calligraphy altogether; to pay for his studies, he was doing headlines in calligraphy for Arabic magazines.

In 1972, he created, with the actor Guy Jacquet and later the musician Fawzi Al Aiedy, Arabesque, a public performance combining music, poetry and live calligraphies projected on a screen .

In 1995, he was involved in the design of the stage set for the ballet “Selim” with the dancer Kader Belarbi from the Opera de Paris and the singer Houria Aichi on a choreography from Kalemenis.

In 2005 he met the dancer and choreographer Carolyn Carlson, and the musician Kudsi Erguner. Together with three other dancers and three other musicians, they created the show “Metaphore”, a harmony of music, dance and calligraphy.