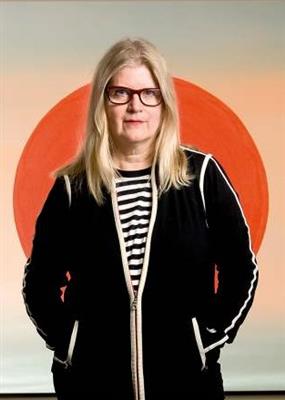 Wanda Koop CM OM is a Canadian interdisciplinary painter who lives and works in Winnipeg, Manitoba.

Koop was born on October 5, 1951 in Vancouver, British Columbia, to Russian-Mennonite parents who had escaped the Russian Revolution. Koop graduated from the Lemoine Fitzgerald School of Art, University of Manitoba, Winnipeg in 1973.

In 2002 Koop was awarded the Queen Elizabeth II Golden Jubilee Medal, in 2005 she was elected to the Royal Canadian Academy of Arts, in 2006 she was appointed a member of the Order of Canada, and in 2016 she received the Governor General's Award in Visual and Media Arts.

Koop and her mother were the subjects of the 2007 documentary Wanda Koop: In Her Eyes about their visit to the Ukraine, where Koop's mother was born.

While still studying at the University of Manitoba School of Art, in 1972, Koop's work was included in an exhibition at the Winnipeg Art Gallery. Throughout the 1980s, 1990s, and 2000s, Koop was the subject of numerous solo exhibitions, including the 1985 travelling exhibition Airplanes and the Wall; the 1991 travelling exhibition Wanda Koop: Recent Paintings; and the 1998 exhibit See Everything, See Nothing at The New Gallery. From February 18 to May 15, 2011 her solo exhibition entitled On The Edge Of Experience was shown at the National Gallery of Canada in Ottawa, Ontario.

Koop's work often combines aspects of video, performance, or photography. As Robin Laurence describes in the Spring 2000 issue of Canadian Art, Koop "is interested in expanding the languages of paint and video, integrating them into the complex terms of loss and grief and reclamation."

In addition to her art, Koop is an ardent community activist. In 1998 she founded Art City, a community art centre in Winnipeg's West Broadway neighbourhood as a way to bring together contemporary visual artists and inner-city youth.