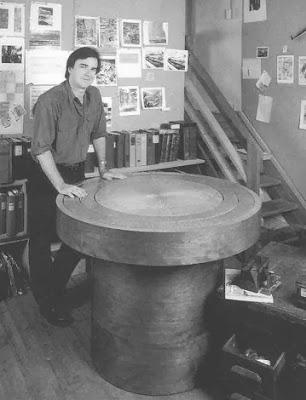 The works of Mark Tansey (whose parents were art historians) challenge the mythology of art history and criticism (especially American formalism), bringing back pictorial rendering and discourse into the foreground. In contrast with the "photo-realist" and "hyper-mannerist" painters of the period, emphasis does not fall solely on technique, as Tansey is interested in “how different realities interact with each other".

Tansey had an early introduction to art. These early childhood experiences had a profound effect on Tansey's painting style from the inception of his career as an artist. Many of Tansey's paintings are monochromatic and seem old-fashioned. His method involves laying down a layer of monochrome pigment on canvas that can be altered easily only before it dries. This leaves Tansey only about a six-hour window in which to complete his alterations. As such, he works in a style similar to fresco painters, painting in segments that he can finish in this short time frame. Tansey's choice of color and tone lends a specific feeling to each painting.

Tansey lives in a two story studio in downtown New York City and works there from late afternoon throughout the night almost every day. The first floor of his studio is reserved for final paintings only, while the second floor is where he creates all of the preparatory sketches and variations that inspire his completed works. He derives his inspiration from photographic reproductions and magazine clippings, and works in stages of small sketches and drawings until he is prepared for the final painting.

From the time he was a young child, Tansey knew that he wanted to continue the family tradition and pursue a future in the art industry. He attended Saturday art classes at the San Francisco Art Institute in his early teen years and made a habit of regularly visiting art museums in the area. Beginning in 1969, Tansey spent three years studying at the Art Center College of Design in Los Angeles. There his works portrayed a deep interest in the appropriation and simulation of media which was a style that did not become popular until the 1980s. His early concern with this technique displays Tansey's deep understanding of art history and the development of art over time.

After graduating, Tansey worked as an assistant at the San Jose State University Gallery. There he became well acquainted with the art that would later influence much of his work. In 1974, Tansey enrolled in the graduate program at Hunter College in New York City. He spent four years studying there, in what was possibly the top graduate art program of the era. There Tansey continued his examination of the historic art introduced to him by his parents, as well as modern painting and sculpture techniques and artists.

Tansey's paintings normally depict everyday or historical occurrences, though they typically reveal certain oddities under closer scrutinization. Although he uses depiction of recognizable objects in realistic perspective states, he is not a "realistic" or rather a "naturalistic" painter, because photography has co-opted the role of realism in painting. He argues that representation has other functions rather than "capturing the real." He argues that his work is about "how different realities interact with each other."

One of Tansey's most potent pieces from this early period is The Last Judgement (1971), which he created from oil on masonite. He was inspired by Michelangelo's fresco in the Sistine Chapel and proceeded to reproduce it in 32 rectangular sections. These were placed on display, arranged four across and eight tall. The entire study was done in shades of grey and brown. For Tansey, this project was "a synthesis of photographic, illustrative, and painterly qualities… The meaning of the work resided in the process of re-translation- reinterpretation reproduction- rather than in its perceptual equivalence to reality." In producing this piece, Tansey "discovered the notion of the 'unlimited brush'- any object able to carry paint could function as a brush… touch was equivalent to light… scraping off the paint let the white ground show through." This technique becomes the basis for many of his later paintings. In this stepwise process, the overwhelming and complex fresco that Tansey saw in the Sistine Chapel was broken down into a methodological and grid-like cacophony of figures.