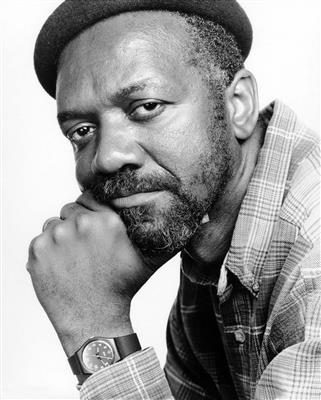 Kerry James Marshall challenges the marginalization of African-Americans through his formally rigorous paintings, drawings, videos, and installations, whose central protagonists are always, in his words, “unequivocally, emphatically black.” As he describes, his work is rooted in his life experience: “You can’t be born in Birmingham, Alabama, in 1955 and grow up in South Central [Los Angeles] near the Black Panthers headquarters, and not feel like you’ve got some kind of social responsibility. You can’t move to Watts in 1963 and not speak about it.” Marshall’s erudite knowledge of art history and black folk art structures his compositions; he mines black culture and stereotypes for his unflinching subject matter. In Black Star (2011), a nude black woman bursts through a Frank Stella-like canvas, commanding attention and daring viewers to consider how she has been (and how she should be) seen and portrayed.

Kerry James Marshall (born October 17, 1955) is an American artist born in Birmingham, Alabama. He grew up in South Central Los Angeles and now lives in Chicago, Illinois, where he previously taught at the School of Art and Design at the University of Illinois at Chicago. He is a 1978 graduate of Otis College of Art and Design. An exhibition of his work, Kerry James Marshall: Mastry, was assembled by the Museum of Contemporary Art in 2016.

Although he currently lives and works in Chicago, Illinois, his time spent in Watts, Los Angeles, California, where the Black Power and Civil Rights movements had a significant impact on his paintings. Strongly influenced by his experiences as a young man, he developed a signature style during his early years as an artist that involved the use of extremely dark, essentially black figures. These images represent his perspective of African Americans with separate and distinct inner and outer appearances. At the same time, they confront racial stereotypes within contemporary American society. This common theme appeared continuously in his work throughout the subsequent decades, especially in the 1980s and 1990s.

While earning his BFA from Otis College of Art and Design in Los Angeles, he worked not have a representational image or a specific story to tell,” over abstraction Thus, Marshall still retains the political content so important to the Civil Rights Movement while painting a narrative through mural-sized pieces.

Marshall is known for large-scale paintings, sculptures, and other objects that take African-American life and history as their subject matter. His work often deals with the effects of the Civil Rights movement on domestic life, in addition to working with elements of popular culture. In a 1998 interview with Bomb Magazine, Marshall observed,

One work, Rythm Mastr, is a superhero comic book based on African mythology and art set in an urban environment. Some of his other notable works include The Garden Project, which critiques the glorified names of housing projects that conceal desperate poverty and the Lost Boys series, which examines young black men "lost in the ghetto, lost in public housing, lost in joblessness, and lost in literacy."

Marshall's first major solo exhibition, which traveled throughout the country, was organized at the Renaissance Society of the University of Chicago in 1998. His work has been exhibited in many American and international exhibitions, including the Venice Biennale (2003) and the Documenta (1997 and 2007).

In April 2016, Marshall's retrospective Mastry debuted at the Museum of Contemporary Art in Chicago as the largest retrospective to date of Marshall's art, which spanned the artist's 35-year career and included nearly 80 original pieces. In October 2016, the retrospective traveled to the Met Breuer in New York City.

Marshall based several of his pieces in the early 1990s on actual events in American history. One such painting, Voyager, painted in 1992, has special pertinence in a discussion of race issues in the United States because Marshall based it on a “luxury schooner…secretly outfitted to carry African slaves”. Symbols of this representation abound, from the two black figures in the boat and the flowers draped around the woman’s neck to the contrast between the light and airy clouds and the darkness of the upper background. A skull lies in the water, just beneath the ship, hinting at the doomed future of the Africans, and the unknown woman has an expression of uneasiness. He thus brings to the forefront the irony of a ship with a beautiful, high class appearance and a dark secret purpose, forcing people to think about something they would rather forget.