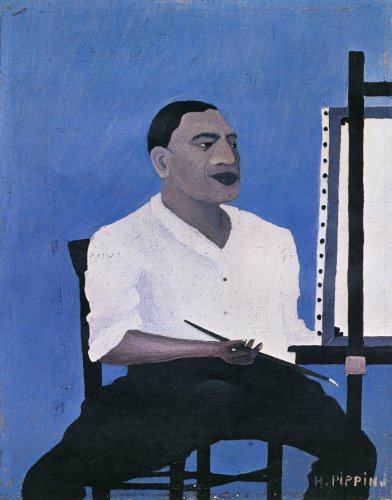 The term Harlem Renaissance refers to the prolific flowering of literary, visual, and musical arts within the African American community that emerged around 1920 in the Harlem neighborhood of New York City. The visual arts were one component of a rich cultural development, including many interdisciplinary collaborations, where artists worked closely with writers, publishers, playwrights, and musicians. There was no single style that defined the Harlem Renaissance, rather artists found different ways to celebrate African American culture and identity. Often, they combined elements of African art with contemporary themes, creating a link that dignified and expanded the history of the African American experience, countering the derogatory caricatures that dominated popular culture.

For artists of the Harlem Renaissance looking for professional African-American role models, only Henry Ossawa Tanner and Mary Edmonia Lewis had gained international fame and success. Yet, faced with racial discrimination and career limitations in America, both artists spent most of their lives in Europe (Tanner in Paris and Lewis in Rome) where they found a more tolerant cultural and artistic environment in the decades following the American Civil War.

The formation of new African American creative communities was engendered in part by the Great Migration—the largest resettlement of Americans in the history of the continental United States. The Great Migration began around 1910, as large numbers of African Americans moved from the rural South to Northern and Midwestern cities, escaping the widespread discrimination and violence of the segregated South and seeking opportunities for work. The combination of Jim Crow laws that rigidly enforced segregation and restricted the civil rights of black Americans and Northern companies that offered incentives to recruit black workers (a drive which intensified during World War I when war mobilization diminished the industrial workforce) encouraged thousands of African Americans to migrate.

Dubbed "the Dean" of the Harlem Renaissance, Alain LeRoy Locke, a noted philosopher, sociologist, writer, educator, critic, and patron of the arts, provided the basis for the intellectual architecture of the movement. His essay Harlem, Mecca of the New Negro in included in a 1925 issue of Survey Graphic that introduced Harlem and its culture to a general audience. He expanded these ideas in The New Negro: An Interpretation (1925), an anthology that included his influential essays, "The New Negro", "Negro Youth Speaks", "The Negro Spirituals", and "The Legacy of Ancestral Arts." Locke contrasted the "old Negro," beaten down by legacies of slavery and the Jim Crow era, with the "new Negro," who could start over in northern cities; he saw new possibilities for challenging and changing old stereotypes, as well as opportunities to overcome the internalized effects of oppression. He emphasized "the necessity for fuller, truer self-expression" to achieve spiritual emancipation, and his ideas influenced the jazz musician Duke Ellington, the writers Langston Hughes and Claude McKay, the sculptor Meta Vaux Warrick Fuller, and the painter Aaron Douglas. The Harlem Renaissance was distinguished for its rich and diverse, interdisciplinary collaborations, inspired by Locke's view that the moral function of art was to remove prejudice. This sentiment became the de facto manifesto of the movement.

Aaron Douglas became a leader within the Harlem Renaissance in the 1920s. He developed a distinctive style that combined influences from African American folk art and African art with Art Deco stylization. In projects such as his illustrations for James Weldon Johnson's God Trombones: Seven Negro Sermons in Verse (1927), Douglas's iconography linked Christian subjects and black subject matter to convey racial pride and spiritual longing in an influential modernist style. His work, along with his legacy of teaching, made him an influential figure for generations of African-American painters.

Throughout the 1920s, the Harlem Renaissance developed alongside the "Jazz Age" as noted performers including Duke Ellington, Louis Armstrong, Fats Waller, and Cab Calloway played in Harlem nightclubs. While widely popular, jazz was initially met with some resistance from the African-American middle class who associated it with lower-class entertainment. The development of the Harlem Stride in the early 1920s helped bridge this class gap, as the piano, an instrument associated with the upper class, was added to the Southern brass band. At the time, white audiences flocked to Harlem venues, drawn by the lively nightlife. The Cotton Club from 1923 to 1935 was the most famous nightclub, and, though it was a whites-only establishment, most of the era's popular African American vocalists, dancers, entertainers, and musicians performed there. Jazz also influenced the visual arts. Aaron Douglas wanted his painting to convey the abstract quality he associated with Negro spirituals while also having a kind of jazz-like visual rhythm, which can be traced in his Charleston (1928). The Chicago artist Archibald J. Motley (although he was not really part of the New York movement) often portrayed scenes of African American nightlife in what he called a "jazz syncopated" style, using bold colors and juxtapositions, like in Blues (1929).

The onset of the Great Depression in 1929 deflated the artistic energy of the period as many people became unemployed and focused on meeting basic needs. Yet the Harlem Renaissance planted artistic seeds that would germinate for decades. Economic hardships forced many African American artists living in Paris to return home. In the decade that followed, artists founded schools, community centers, and art collectives in Harlem as they sought to create their own venues for the opportunity. In 1932, Augusta Savage founded the Savage School of Arts and Crafts and became an influential teacher to the second generation of Harlem artists, including Norman Lewis, Romare Bearden, and Jacob Lawrence. In 1935, she cofounded the Harlem Artists Guild in order to train young artists, encourage community arts involvement and education, and create more opportunity for black artists. The Guild also advocated that the Federal Arts Project, a branch of the Works Progress Administration (a New Deal program of Franklin Delano Roosevelt's presidency, designed to counteract the effects of the Great Depression by providing work for artists), needed to recruit more African Americans. In 1937, The Harlem Artists Guild succeeded in opening the Harlem Community Art Center, funded by the WPA; Savage was appointed as its first director. It remained a vibrant hub of the arts until World War II, when a lack of funding closed its doors.

Other murals informed and evoked forgotten moments of African-American history, such as Hale Woodruff's The Mutiny on the Amistad (1939) depicting the 53 Africans kidnapped from Sierra Leone to be sold into Spanish slave trade, and the uprising of Senbeh Pieh, also known as Cinque. When Talladega College commissioned the series of murals in 1938, few had ever heard of the event, including the artist who had to engage in extensive research to create the work. Modern-day art critic Roberta Smith wrote that the works "teach history by making it visually riveting."

Other murals connected African traditions to modern life, as Charles Alston's pair of murals: Magic in Medicine (1940), which depicted traditional African healing methods, and the contemporary practices of Modern Medicine (1940). In 1937, Alston was the first African American to assume a leadership role in the Federal Arts Project, but these panels created for the Harlem Hospital were controversial and therefore not installed until 1940.

Many notable artists also created work for book illustrations, children's literature, brochures, advertisements, and posters. Often, their work blurred the categories of illustration and high art, such as Aaron Douglas's illustrations for James Weldon Johnson's God Trombones: for Seven Negro Sermons in Verse (1927), which became the basis for his later masterworks like Let My People Go (c. 1935-1939). Collaborations between the leading women artists of the Harlem Renaissance, such as Loïs Mailou Jones, who illustrated Gertrude P. McBrown's poem Fire-Flies (1929) for the Saturday Evening Quill, brought greater visibility to African American women. Illustration launched the careers of second-generation artists like Beauford Delaney, who worked in the 1930s creating images for the poster division of the WPA before becoming a painter.

The Harlem Renaissance came to an end in the early 1940s with World War II. Yet, even without its geographic center, the second generation of Harlem Renaissance artists, like Jacob Lawrence and Charles Alston, continued working in the following decades. Others, like Romare Bearden, explored new subject matter and styles.

The Harlem Renaissance influenced Négritude, a literary and cultural movement that began in the 1930s and was led by Aimé Césaire, Leopoldl Senghor, and Leon Damas. This group of French-speaking authors from French colonies in Africa and the Caribbean had a long-lasting influence, including upon the French philosopher Jean-Paul Sartre. In subsequent decades, the Harlem Renaissance inspired new waves of artists and laid critical groundwork for the civil rights movement and the Black Arts Movement.

Jacob Lawrence's work influenced a number of later artists, including Kerry James Marshall (whose own work influenced the Mbari art movement in Kenya), and Faith Ringgold (whose work played an important role in the 1970s Feminist art movement), as well as Robert Colescott, Hank Willis Thomas, and Alexis Gideon.