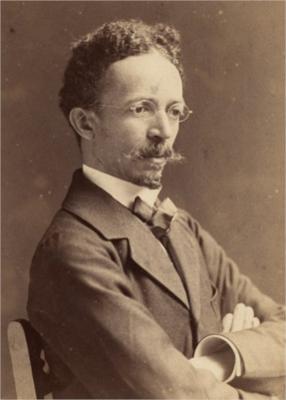 Henry Ossawa Tanner (June 21, 1859 – May 25, 1937) was an American artist and the first African-American painter to gain international acclaim. Tanner moved to Paris, France, in 1891 to study, and continued to live there after being accepted in French artistic circles. His painting entitled Daniel in the Lions' Den was accepted into the 1896 Salon, the official art exhibition of the Académie des Beaux-Arts in Paris.

After his own self-study in art as a young man, Tanner enrolled in 1879 at the Pennsylvania Academy of the Fine Arts in Philadelphia. The only black student, he became a favorite of the painter Thomas Eakins, who had recently begun teaching there. Tanner made other connections among artists, including Robert Henri. In the late 1890s he was sponsored for a trip to Palestine by Rodman Wanamaker, who was impressed by his paintings of biblical themes.

Tanner was born in Pittsburgh, Pennsylvania, the first of seven children. His middle name commemorated the struggle at Osawatomie between pro- and anti-slavery partisans. His father Benjamin Tucker Tanner (1835-1923) was a bishop in the African Methodist Episcopal Church, the first independent black denomination in the United States. Being educated at Avery College and Western Theological Seminary in Pittsburgh, he developed a literary career. In addition, he was a political activist. His mother Sarah Tanner was born into slavery in Virginia but had escaped to the North via the Underground Railroad. She was mixed race, and Tanner himself was either a quadroon or an octoroon.

The family moved to Philadelphia when Tanner was young. There his father became a friend of Frederick Douglass, sometimes supporting him, sometimes criticizing.

Although many artists refused to accept an African-American apprentice, in 1879 Tanner enrolled at the Pennsylvania Academy of the Fine Arts in Philadelphia, becoming the only black student. His decision to attend the school came at an exciting time in the history of artistic institutional training. Art academies had long relied on tired notions of study devoted almost entirely to plaster cast studies and anatomy lectures. This changed drastically with the addition of Thomas Eakins as “Professor of Drawing and Painting” to the Pennsylvania Academy. Eakins encouraged new methods such as study from live models, direct discussion of anatomy in male and female classes, and dissections of cadavers to further familiarity and understanding of the human body. Eakins’s progressive views and ability to excite and inspire his students would have a profound effect on Tanner. The young artist proved to be one of Eakins’ favorite students; two decades after Tanner left the Academy, Eakins painted his portrait, making him one of a handful of students to be so honored.

At the Academy Tanner befriended artists with whom he kept in contact throughout the rest of his life, most notably Robert Henri, one of the founders of the Ashcan School. During a relatively short time at the Academy, Tanner developed a thorough knowledge of anatomy and the skill to express his understanding of the weight and structure of the human figure on the canvas.