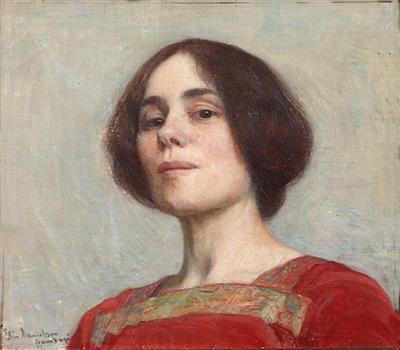 
Elin Danielson was born in the small village of Noormarkku, near the city of Pori in Western Finland. At the age of 15 she moved to Helsinki and started studying in the Academy of Fine Arts.


In 1883 she left for Paris. She took lessons at the Académie Colarossi and painted in Brittany during the summertime. A few years later she returned to Finland and lived with her relatives in Noormarkku and Pori. In 1888 she opened an atelier in Noormarkku. During the 1880s and 1890s she also worked as a teacher in several art schools around Finland.


In 1895 she received a scholarship and traveled to Florence, Italy. A year later she moved to the village of Antignano and married an Italian painter, Raffaello Gambogi (1874–1943). They had exhibitions in Paris, Florence and Milan and in many Finnish cities, and their paintings were also included in the 1900 World's Fair in Paris.


Elin Danielson-Gambogi died of pneumonia in Antignano and was buried in Livorno.