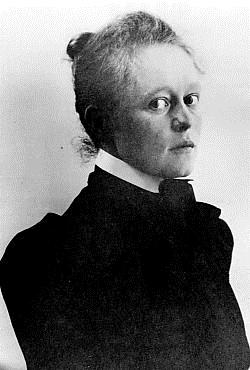 Helene Schjerfbeck (July 10, 1862 – January 23, 1946, pronounced IPA: [he'le:n 'ɧærvbek] in Standard Swedish and IPA: [helɛ:n ʃærvbek] in Finland Swedish) was a Finnish painter. She is most widely known for her realist works and self-portraits, and less well known for her landscapes and still lifes. Throughout her long life, her work changed dramatically.

Helena Sofia Schjerfbeck was born on July 10, 1862, in Helsinki, Finland (then an autonomous Grand-Duchy within the Russian Empire), to Svante Schjerfbeck (an office manager) and Olga Johanna (née Printz). When she was four she suffered a hip injury, which prevented her from attending school. She showed talent at an early age, and by the time she was eleven she was enrolled at the Finnish Art Society Drawing School, where her fees were paid by Adolf von Becker, who saw promise in her [ref. Ahtola-Moorhouse]. At this School Schjerfbeck met Helena Westermarck.

When Schjerfbeck’s father died of tuberculosis on February 2, 1876, Schjerfbeck’s mother took in boarders so that they could get by. A little over a year after her father’s death, Schjerfbeck graduated from the Finnish Art Society drawing school. She continued her education, with Westermarck, at a private academy run by Adolf von Becker, which utilised the University of Helsinki drawing studio. Professor G. Asp paid for her tuition to Becker’s private academy. There, Becker himself taught her French oil painting techniques.

In 1879, at the age of 17, Schjerfbeck won third prize in a competition organised by the Finnish Art Society, and in 1880 her work was displayed in an annual Finnish Art Society exhibition. That summer Schjerfbeck spent time at a manor owned by her aunt on her mother’s side, Selma Printz, and Selma’s husband Thomas Adlercreutz. There she spent time drawing and painting her cousins. Schjerfbeck became particularly close to her cousin Selma Adlercreutz, who was her age. She set off to Paris later that year after receiving a travel grant from the Imperial Russian Senate.

In Paris, Schjerfbeck painted with Helena Westermarck, then left to study with Léon Bonnat at Mme Trélat de Vigny’s studio. In 1881 she moved to the Académie Colarossi, where she studied once again with Westermarck. The Imperial Senate gave her another scholarship, which she used to spend a couple of months in Meudon, and then a few more months in Concarneau, Brittany. She then went back to the Académie Colarossi briefly, before returning to the Adlercreutz family manor in Finland. Schjerfbeck continued to move around frequently, painting and studying with various people. Schjerfbeck made money by continuing to put her paintings in the Art Society’s exhibitions, and she also did illustrations for books. In 1884 she was back in Paris at the Académie Colarossi with Westermarck, but this time they were working there. She was given more money to travel by a man from the Finnish Art Society and in 1887 she traveled to St Ives, Cornwall, in Britain. There she painted The Convalescent, which won the bronze medal at the 1889 Paris World Fair. The painting was later bought by the Finnish Art Society. At this period Schjerfbeck was painting in a naturalistic plein-air style.