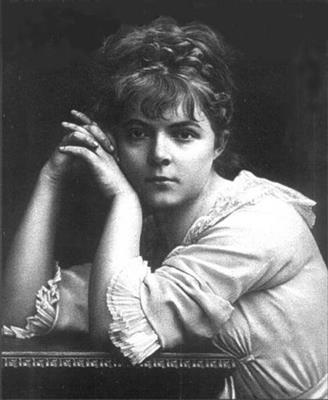 Bashkirtseff was born Maria Konstantinovna Bashkirtseva in Gavrontsi near Poltava to a wealthy noble family, but her parents separated when she was quite young. As a result, she grew up mostly abroad, traveling with her mother throughout most of Europe, with longer spells in Germany and on the Riviera, until the family settled in Paris. Educated privately and with early musical talent, she lost her chance at a career as a singer when illness destroyed her voice. She then determined on becoming an artist, and she studied painting in France at the Robert-Fleury studio and at the Académie Julian. The Académie, as one of the few establishments that accepted female students, attracted young women from all over Europe and the United States. Fellow students at the Académie included Anna Bilińska-Bohdanowiczowa and especially Louise Breslau, whom Bashkirtseff viewed as her only real rival. Bashkirtseff would go on to produce a remarkable, if fairly conventional, body of work in her short lifetime, exhibiting at the Paris Salon as early as 1880 and every year thereafter until her death (except 1883). In 1884, she exhibited a portrait of Paris slum children entitled The Meeting and a pastel portrait of her cousin, for which she received an honorable mention.

Bashkirtseff's best-known works are The Meeting (now in the Musée d'Orsay, Paris) and In the Studio, (shown here) a portrait of her fellow artists at work. Although a large number of Bashkirtseff's works were destroyed by the Nazis during World War II, at least 60 survive. In 2000, a U.S. touring exhibition entitled "Overcoming All the Obstacles: The Women of Academy Julian" featured works by Bashkirtseff and her schoolmates.

As a painter, Bashkirtseff took her cue from her friend Jules Bastien-Lepage's admiration for realism and naturalism. Where Bastien-Lepage had found his inspiration in nature, Bashkirtseff turned to the urban scene, writing, "I say nothing of the fields because Bastien-Lepage reigns over them as a sovereign; but the streets, however, have not yet had their... Bastien." By unlucky chance, both artists succumbed prematurely to chronic illness in the same year, and the later pages of Bashkirtseff's journal record her visits to the dying painter.

Dying of tuberculosis at the age of 25, Bashkirtseff lived just long enough to emerge as an intellectual in Paris in the 1880s. She wrote several articles for Hubertine Auclert's feminist newspaper La Citoyenne in 1881 under the nom de plume "Pauline Orrel." One of her most-quoted sayings is "Let us love dogs, let us love only dogs! Men and cats are unworthy creatures."

Bashkirtseff died in Paris in 1884, and she is buried in Cimetière de Passy, Paris. Her monument is a full-sized artist's studio that has been declared a historic monument by the government of France.

From approximately the age of 13, Bashkirtseff kept a journal, and it is probably for this that she is most famous today. It has been called "a strikingly modern psychological self-portrait of a young, gifted mind," and her urgent prose, which occasionally breaks out into dialogue, remains extremely readable. She was multilingual and despite her self-involvement, was a keen observer with an acute ear for hypocrisy, so that her journal also offers a near-novelistic account of the late nineteenth century European bourgeoisie. A consistent theme throughout her journal is her deep desire to achieve fame, inflected by her increasing fear that her intermittent illnesses might turn out to be tuberculosis. In a prefatory section written toward the end of her life, in which she recounts her family history, she writes, "If I do not die young I hope to live as great artist; but if I die young, I intend to have my journal, which cannot fail to be interesting, published." Similarly: "When I am dead, my life, which appears to me a remarkable one, will be read. (The only thing wanting is that it should have been different)." In effect, the first half of Bashkirtseff's journal is a coming-of-age story while the second is an account of heroic suffering.