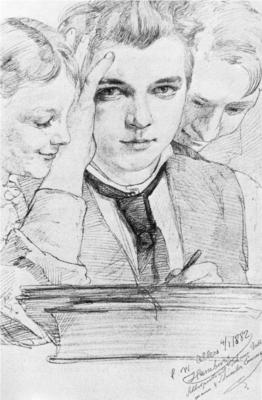 Allers, the son of a merchant, was born in Hamburg. He first worked as a lithographer, and in 1877 he moved to Karlsruhe where he continued to work as a lithographer. In the Kunstakademie (state academy of fine arts) he was a scholar of Prof. Ferdinand Keller.

From 1880–81 he served in the German navy in Kiel where Anton Alexander von Werner supported him. In Kiel he got to know Klaus Groth, who became a friend of his.

Allers became well-known when he published his collection of prints "Club Eintracht" in 1888. Several other books and maps (collections of prints) followed, for the sake of example about Bismarck, so at the beginning of the 1890s he was able to build a villa on Capri. He lived there for many years, also spending some time in Hamburg, Karlsruhe, and travelling around the world.

In autumn 1902, there was a scandal. Friedrich Alfred Krupp, another famous person living in Capri, was accused by some Italian newspapers of homosexuality and pederasty. Some weeks later, Allers was accused, by court. Krupp died some weeks later, presumably a suicide. Allers managed to escape before the lawsuit began, which led to a sentence of 4½ years imprisonment, pronounced in absentia. According to Tito Fiorani (Le dimore del mito, La Conchiglia, Capri 1996, pp. 23 e 24), "Allers had distinctly homosexual tendencies, and liked to surround himself with boys, whom he often used as models".

Allers left Capri and began travelling around the world for more than 10 years, staying some time in New Zealand, Samoa, and Australia. During this time, he often used the pseudonym "W. Andresen", and earned money by making portraits of wealthy people. He died in 1915 in Karlsruhe some months after returning to Germany.

Allers was a naturalist. His drawings are rich in detail and are of realistic style, so they often lack emotions. Although the drawings look realistic, Allers sometimes added persons to scenes who were never at that location. In this respect, he was not a realist. Technically, Allers often used pencil. To start with, his colored drawings were usually in pencil and were colored later (pastel, oil, ...). His subjects were: