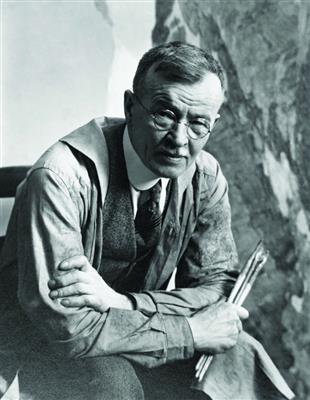 Carl Clemens Moritz Rungius (August 18, 1869 – October 21, 1959) was a leading American wildlife artist. He was born in Germany though he immigrated to the United States and he spent his career painting in the western United States and Canada. Active primarily in the first half of the 20th century, he earned a reputation as the most important big game painter and the first career wildlife artist in North America.

Rungius was born in Rixdorf, now a part of Berlin, Germany, to Pastor Heinrich Rungius (1833-1922) and Magdalene Fulda. Rungius spent most of his childhood in Britz, also part of Berlin. Rungius had seven sisters and one brother. His family had interests in art, nature, and taxidermy, and from an early age, Rungius enjoyed hunting and knew he wanted to be a wildlife painter. Upon reaching school age, Carl was sent away to live with his widowed grandmother in the village of Burg bei Magdeburg. He demonstrated a passion for hunting from a young age, and it’s this passion which would dominate his later life and be a tremendous influence on his artwork. From an early age, Rungius also showed ambition to be an artist. In his teenage years, an exhibition by Richard Friese, Germany’s foremost wildlife artist, reinforced Rungius’s ambition. He had several obstacles to overcome though before he would obtain his objective. Rungius had a tremendous dislike for school. Despite this, he completed his academic coursework and passed his examinations, qualifying for a mandatory year of military services. He served his one year of military service in 1891. His father also had strong oppositions to him becoming a painter. Eventually his father did relent, but only on the condition that Carl would start his profession in an acceptable fashion, by learning the trade of a house painter. For the next three summers, Rungius apprenticed as a wall and woodwork painter.

Rungius studied art at the Berlin Art Academy from 1888-1890. Rungius’s art education began with a course in ornamental design. He was not very interested in this however, and he increasingly spent his free time at the Berlin Zoo sketching and studying the animals there. Zoo animals were not subjects he could handle physically; he could not get under their skin and see for himself how muscle, bone, tendon and tissue melded together to form the living animal. In order to get a better look at the anatomy of animals, Rungius made frequent visits to the local glue factory to study animal anatomy in its most basic form. Rungius’s father often shot stray cats in his garden and would turn the carcass’s over to Carl. Although his work in the glue factory and with cats was unpleasant, Rungius felt it was critical to his artistic development.

In 1894, Rungius's Uncle Clemens Fulda invited him to hunt moose in Maine. Shortly after, in 1895, he traveled to Wyoming, which for him was an exotic experience. Open skies, mountain scenes and big game abounded. He made extensive studies of his trophies, and stalked game, which allowed him to gain a better understanding of the animals he painted. His summer in Wyoming persuaded Rugius that the United States would be his new home; “I painted from the collected material and later in the spring of 1896, I went back to Germany...My decision to cut all ties with the Old World and to live in America got good was due in no small part to this first Wyoming trip. For my heart was in the West.”