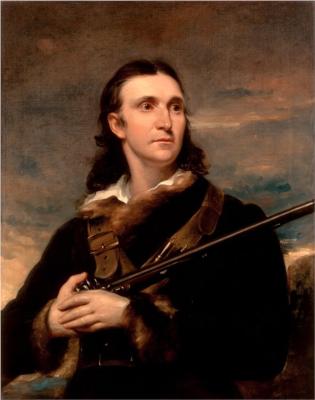 John James Audubon (born Jean Rabin; April 26, 1785 – January 27, 1851) was an American ornithologist, naturalist, and painter. He was notable for his extensive studies documenting all types of American birds and for his detailed illustrations that depicted the birds in their natural habitats. His major work, a color-plate book entitled The Birds of America (1827–1839), is considered one of the finest ornithological works ever completed. Audubon identified 25 new species.

Audubon was born in Les Cayes in the French colony of Saint-Domingue (now Haiti) on his father's sugarcane plantation. He was the son of Lieutenant Jean Audubon, a French naval officer (and privateer) from the south of Brittany, and his mistress Jeanne Rabine, a 27-year-old chambermaid from Les Touches, Brittany (now in the modern region Pays de la Loire). They named the boy Jean Rabin. Another 1887 biographer has stated that his mother was a lady from a Louisiana plantation. His mother died when the boy was a few months old, as she had suffered from tropical disease since arriving on the island. His father already had an unknown number of mixed-race children (among them a daughter named Marie-Madeleine), some by his mulatto housekeeper, Catherine "Sanitte" Bouffard (described as a quadroon, meaning she was three-quarters European in ancestry). Following Jeanne Rabin's death, Jean Audubon renewed his relationship with Sanitte Bouffard and had a daughter by her, named Muguet. Bouffard also took care of the infant boy Jean.

The senior Audubon had commanded ships. During the American Revolution, he had been imprisoned by Britain. After his release, he helped the American cause. He had long worked to save money and secure his family's future with real estate. Due to slave unrest in the Caribbean, in 1789 he sold part of his plantation in Saint-Domingue and purchased a 284-acre farm called Mill Grove, 20 miles from Philadelphia, to diversify his investments. Increasing tension in Saint-Domingue between the colonists and the African slaves, who greatly outnumbered them, convinced Jean Audubon to return to France, where he became a member of the Republican Guard. In 1791 he arranged for his natural children, Jean and Muguet, who were majority-white in ancestry, to be transported and delivered to him in France.

The children were raised in Couëron, near Nantes, France, by Audubon and his French wife, Anne Moynet Audubon, whom he had married years before his time in Saint-Domingue. In 1794 they formally adopted both his natural children to regularize their legal status in France. They renamed the boy Jean-Jacques Fougère Audubon and the girl Rose. When Audubon, at age 18, boarded ship in 1803 to immigrate to the United States, he changed his name to an anglicized form: John James Audubon.

From his earliest days, Audubon had an affinity for birds. "I felt an intimacy with them...bordering on frenzy [that] must accompany my steps through life." His father encouraged his interest in nature:

In France during the chaotic years of the French Revolution and its aftermath, the younger Audubon grew up to be a handsome and gregarious man. He played flute and violin, and learned to ride, fence, and dance. A great walker, he loved roaming in the woods, often returning with natural curiosities, including birds' eggs and nests, of which he made crude drawings. His father planned to make a seaman of his son. At twelve, Audubon went to military school and became a cabin boy. He quickly found out that he was susceptible to seasickness and not fond of mathematics or navigation. After failing the officer's qualification test, Audubon ended his incipient naval career. He was cheerfully back on solid ground and exploring the fields again, focusing on birds.