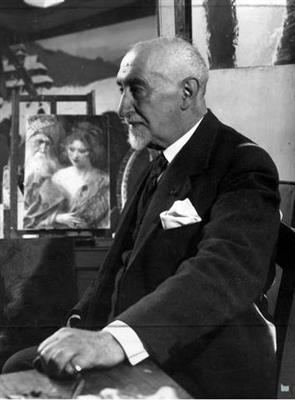 Teodor Axentowicz (Armenian: Թեոդոր Աքսենտովիչ; May 13, 1859 in Braşov, Austrian Empire – August 26, 1938 in Kraków, Second Polish Republic) was a Polish-Armenian painter and university professor. A renowned artist of his times, he was also the rector of the Academy of Fine Arts in Kraków. As an artist, Axentowicz was famous for his portraits and subtle scenes of Hutsul life, set in the Carpathians.


Axentowicz was born May 13, 1859 in Braşov, Hungary (now Romania), to a family of Polish-Armenian ancestry. In 1893 in Chelsea, London, he married Iza Henrietta Gielgud, aunt of Val Gielgud and John Gielgud of the theatrical dynasty. A son, Philip S.A.D. Axentowicz was born in Chelsea in 1893.


Between 1879 and 1882 he studied at the Academy of Fine Arts in Munich. From there he moved to Paris, where he was a student of Carolus-Duran and continued his education until 1895. During that time he started a long-time cooperation with various journals and started his career as a copyist, duplicating the works of Tizian and Botticelli for Le Monde illustré. He also made numerous travels to London and Rome, where he prepared a set of portraits, one of the first in his career.


In 1894 he started collaboration with Wojciech Kossak and Jan Styka during the preparation of the Racławice Panorama, one of the largest panoramic paintings in the history of Polish art. The following year he moved to Kraków, where he became a professor at the local Academy of Fine Arts. He was also active in the local society and cooperated with various societies devoted to propagation of arts and crafts. In 1897 he founded an artistic conservatory for women and soon afterwards became one of the founders of the Sztuka society, whose members were such artists as Józef Chełmoński, Julian Fałat, Jacek Malczewski, Józef Mehoffer, Jan Stanisławski, Włodzimierz Tetmajer, Leon Wyczółkowski and Stanisław Wyspiański. In 1910 he became the rector of the Academy and since 1928 was also an honorary member of the Zachęta Society. He died August 26, 1938 in Kraków.


In 1904 at the St. Louis World's Fair, Axentowicz received a Special Commemorative Award in recognition of distinguished service in connection with various national sections of the Department of Art.


While in Paris, he received the prestigious title of Officier d'Académie Ordre des Palmes Académiques and Member of Académie des Beaux-Arts.


In addition to Society of Polish Artists "Sztuka", he was also a member of Hagenbund and a founding member of the Vienna Secession.


In 1909, he was knighted by Franz Joseph I of Austria to Order of the Iron Crown (Austria).