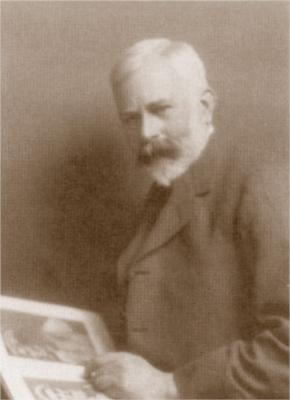 Archibald Thorburn FZS (31 May 1860 - 9 October 1935 Hascombe, Surrey) was a Scottish artist and animal painter and bird illustrator, painting mostly in watercolour. He regularly visited Scotland to sketch birds in the wild, his favourite haunt being the Forest of Gaick near Kingussie in Invernesshire. His widely reproduced images of British wildlife, with their evocative and dramatic backgrounds, are enjoyed as much today as they were by sportsmen and birdlovers of a century ago.

Archibald was born at Viewfield House, Lasswade, Midlothian, the fifth son of Robert Thorburn (1818–1885), portrait miniaturist to Queen Victoria. His first education was at Dalkeith and in Edinburgh, after which he was sent to the newly founded St John's Wood School of Art in London. His stay there was only brief, since on the death of his father he sought the guidance of Joseph Wolf. It was his commission in 1887 to illustrate Lord Lilford's Coloured Figures of the Birds of the British Isles, for which he painted some 268 watercolours, that established his reputation. He illustrated numerous sporting and natural history books, including his own. He taught Otto Murray Dixon and Philip Rickman (both in Nature in Art's collection), and he encouraged the young Donald Watson when he came to visit him in Dumfries and Galloway. Thorburn was friends of other eminent bird illustrators including George Edward Lodge and John Guille Millais with whom he collaborated on a number of works including: Natural History of British Feeding Ducks; British Diving Ducks and British Game Birds.

On his marriage to Constance Mudie, Thorburn moved to High Leybourne in Hascombe in 1902, where he was to spend the rest of his life. In the 1930s he refused to make use of electric lighting, preferring natural light for his painting, and making use of lamps and candles. His grave is at St John the Baptist church in Busbridge, Godalming.