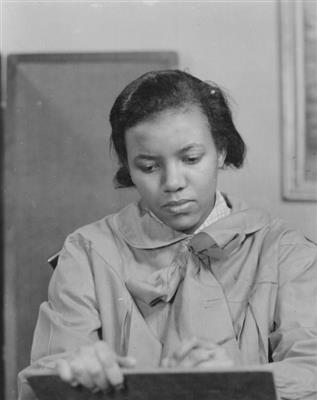 Augusta Savage (born Augusta Christine Fells; February 29, 1892 – March 27, 1962) was an American sculptor associated with the Harlem Renaissance. She was also a teacher whose studio was important to the careers of a generation of artists who would become nationally known. She worked for equal rights for African Americans in the arts.


Augusta Christine Fells was born in Green Cove Springs (near Jacksonville), Florida on February 29, 1892, to Edward Fells, a Methodist minister, and Cornelia Murphy. Augusta began making figures as a child, mostly small animals out of the natural red clay of her hometown, Green Cove Springs Florida. Her father was a poor Methodist minister who strongly opposed his daughter's early interest in art. "My father licked me four or five times a week,” Savage once recalled, “and almost whipped all the art out of me.” This was because at that time, he believed her sculpture to be a sinful practice, based upon his interpretation of the "graven images" portion of the Bible. She persevered, and the principal of her new high school in West Palm Beach, where her family relocated in 1915, encouraged her talent and allowed her to teach a clay modeling class. This began a lifelong commitment to teaching as well as to creating art.


In 1907 Augusta Fells married John T. Moore. Her only child, Irene Connie Moore, was born the following year. John died shortly thereafter. In 1915, she married James Savage; she kept the name of Savage throughout her life. After their divorce in the early 1920s, Augusta Savage moved back to West Palm Beach.


Savage continued to model clay, and in 1919 was granted a booth at the Palm Beach County Fair where she was awarded a $25 prize and ribbon for most original exhibit. Following this success, she sought commissions for work in Jacksonville, Florida, before departing for New York City in 1921. She arrived with a letter of recommendation from the Palm Beach County Fair official George Graham Currie for sculptor Solon Borglum and $4.60. When Borglum discovered that she could not afford tuition at the School of American Sculpture, he encouraged her to apply to Cooper Union, a scholarship-based school, in New York City where she was admitted in October 1921. She was selected before 142 other men on the waiting list. Her talent and ability so impressed the Cooper Union Advisory Council that she was awarded additional funds for room and board when she lost the financial support of her job as an apartment caretaker. From 1921 through 1923, she studied under sculptor George Brewster. She completed the four-year degree course in three years.


In 1923 Savage applied for a Summer art program sponsored by the French government; although being more than qualified, she was turned down by the international judging committee solely because they refused to award a spot to a Black person. Savage was deeply upset and questioned the committee, beginning the first of many public fights for equal rights in her life. Though appeals were made to the French government to reinstate the award, they had no effect and Savage was unable to study at the Fontainebleau School of Fine Arts. The incident got press coverage on both sides of the Atlantic, and eventually, the sole supportive committee member sculptor Hermon Atkins MacNeil – who at one time had shared a studio with Henry Ossawa Tanner – invited her to study with him. She later cited him as one of her teachers.