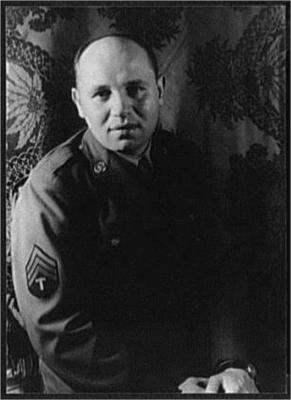 Romare Bearden, in his army uniform, a photograph taken by Carl Van Vechten, 1944

Romare Bearden (September 2, 1911 – March 12, 1988) was an African-American artist. He worked with many types of media including cartoons, oils and collages. Born in Charlotte, North Carolina, educated in Pittsburgh, Pennsylvania, Bearden moved to New York City after high school and went on to graduate from NYU in 1935. He began his artistic career creating scenes of the American South. Later, he endeavored to express the humanity he felt was lacking in the world after his experience in the US Army during World War II on the European front. He later returned to Paris in 1950 and studied Art History and Philosophy at the Sorbonne in 1950.

Bearden's early work focused on unity and cooperation within the African-American community. After a period during the 1950s when he painted more abstractly, this theme reemerged in his collage works of the 1960s, when Bearden became a founding member of the Harlem-based art group known as The Spiral, formed to discuss the responsibility of the African-American artist in the struggle for civil rights.

Bearden was the author or coauthor of several books, and was a songwriter who co-wrote the jazz classic "Sea Breeze", which was recorded by Billy Eckstine, a former high school classmate at Peabody High School, and Dizzy Gillespie. His lifelong support of young, emerging artists led him and his wife to create the Bearden Foundation to support young or emerging artists and scholars. In 1987, Bearden was awarded the National Medal of Arts. His work in collage led the New York Times to describe Bearden as “the nation's foremost collagist” in his 1988 obituary.

Bearden was born in Charlotte, North Carolina. Bearden's family moved him to New York City as a toddler, and their household soon became a meeting place for major figures of the Harlem Renaissance. His mother, Bessye Bearden, played an active role with New York City's Board of Education, and also served as founder and president of the Colored Women's Democratic League. Bessye Bearden was also a New York correspondent for The Chicago Defender, an African-American newspaper. Young Romare Bearden traveled frequently, to Pittsburgh, Pennsylvania and to visit family members in Charlotte, North Carolina.

In 1929 he graduated from Peabody High School in Pittsburgh, Pennsylvania. He then enrolled in Lincoln University, the nation's first Historically Black College and University founded in 1854. He later transferred to Boston University where he served as art director for Beanpot, Boston University's student humor magazine. Bearden continued his studies at New York University (NYU), where he started to focus more on his art and less on athletics, and became a lead cartoonist and art editor for the Eucleian Society's (a secretive student society at NYU) monthly journal, The Medley. Bearden studied art, education, science and mathematics, graduating with a degree in science and education in 1935. He continued his artistic study under German artist George Grosz at the Art Students League in 1936 and 1937. During this period he supported himself as a political cartoonist for African-American newspapers, including the Baltimore Afro-American, where he did a weekly cartoon from 1935 until 1937.