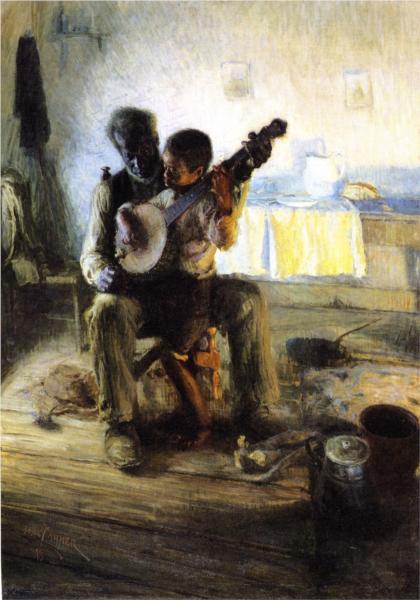 In 1893 on a short return visit to the United States, Tanner painted his most famous work, The Banjo Lesson, while in Philadelphia. The painting shows an elderly black man teaching a boy, assumed to be his grandson, how to play the banjo. This deceptively simple-looking work explores several important themes. Blacks had long been stereotyped as entertainers in American culture, and the image of a black man playing the banjo appears throughout American art of the late 19th century. Thomas Worth, Willy Miller, Walter M. Dunk, Eastman Johnson, and Tanner’s teacher Thomas Eakins had tackled the subject in their artwork.
These images are often reduced to a minstrel-type portrayal. Tanner painted a sensitive reinterpretation. Instead of a generalization, the painting portrays a specific moment of human interaction. The two characters concentrate intently on the task before them. They seem to be oblivious to the rest of the world, which enlarges the sense of real contact and cooperation. The skillfully painted portraits of the individuals make it obvious that these are real people and not types.
In addition to being a meaningful exploration of human qualities, the piece is masterfully painted. Tanner undertakes the difficult endeavor of portraying two separate and varying light sources. A natural white, blue glow from outside enters from the left while the warm light from a fireplace is apparent on the right. The figures are illuminated where the two light sources meet; some have hypothesized this as a manifestation of Tanner’s situation in transition between two worlds, his American past and his newfound home in France.