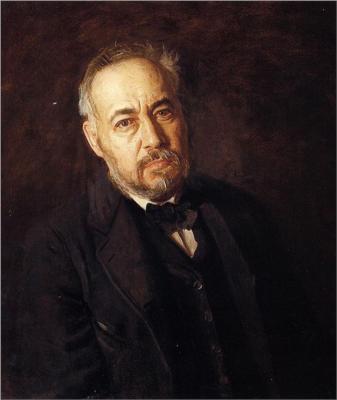 Thomas Eakins, America's greatest realist, dedicated his career to representing the human figure in oil and watercolor, sculpture, and photography. His style renounced idealized and romantic depictions and advocated instead for meticulous investigation of the human form and the natural world. He embraced photography from its beginning as a tool to prepare his compositions, and his bold and resolute paintings would greatly influence the next generation of American Realists known as the Ashcan School.

Eakins was born in Philadelphia in 1844. He was enrolled at the Pennsylvania Academy of the Fine Arts from 1862 to 1866, attended anatomy lectures at Jefferson Medical College, and profited from contact with Philadelphia's art collections, exhibitions, and artists. Arriving in Paris for study in 1866, Eakins was in the vanguard of young painters who would shift the focus of American art from landscape to the figural subjects favored by the European academies. After almost three years of instruction in France, principally at the École des Beaux-Arts under Jean-Léon Gérôme (1824–1904) and briefly, with the portraitist Léon Bonnat (1833–1922), and winter working in Spain, Eakins returned to Philadelphia in July 1870.

He set up his studio at his childhood home, where he lived for the rest of his life. He painted relatives and friends, predominantly women, engaged in everyday activities in domestic interiors. He was also inspired by the outdoor sports he had enjoyed since youth: rowing, fishing, hunting, and sailing. Eakins embarked upon a series of oil paintings and watercolors of male athletes at identifiable locations in the Philadelphia region. An avid rower since the 1860s, the artist created approximately fourteen sculling works. The first and best known of these is Max Schmitt in a Single Scull (1871). Eakins portrayed his longtime friend Max Schmitt in a boat on the Schuylkill River, which was located near the artist’s home.

In April 1875, Eakins created what would become known as his masterpiece, The Gross Clinic. The canvas occupied him for almost a year and provoked much controversy at the Philadelphia Centennial Exposition. The artist specifically created The Gross Clinic for this exhibition; the art committee rejected the painting, however, offended by its bloody subject matter. Eakins displayed it in the exhibition’s medical section, where it drew attention to Philadelphia’s long history as an advanced medical center. The artist was committed to a scientific inquiry of natural laws to the point that he took anatomy lessons and observed dissections and surgeries. His uncompromising realism based on his astute observations brought scientific rigor to his painting practice.

Having begun teaching at the Pennsylvania Academy in 1876, Eakins transformed it into the leading art school in America. However, discontent also arose concerning his teaching methods, especially his emphasis on the nude. Because he felt that professional artists needed to have complete knowledge of the human body and its workings, Eakins insisted on working from nude models. Controversially eschewing Victorian propriety, both his male and female students learned to draw observing the nude figure.
Eakins' easy acceptance of nudity as an essential element of the academic study did not please Victorian Philadelphia. In January 1886, lecturing about the pelvis to a class that included female students, Eakins removed a loincloth from a male model so that he could trace the course of a muscle. Angry protests by parents and students forced him to resign at the request of the Academy board.

From 1887 until the end of his career, Eakins focused almost exclusively on portraiture. He usually worked at life scale, renouncing outdoor light, and focusing on the sitter in isolation. His portraits reflect an investigative candor that is distant from the glamour or artiness in the paintings of his peers James McNeill Whistler and John Singer Sargent. Eakins' depictions of men and women were markedly different. His men, usually middle-class and professional, were portrayed at work or pursuing leisure activities, such as rowing and swimming. They embodied virile masculinity with calm and repose. His women, however, were always shown in interior settings, and he emphasized their inner world, exhibiting them in contemplation.

Eakins rarely received commissions for portraits, and most of his sitters were friends or acquaintances. In 1898 and 1899, for the first time since the 1870s, Eakins returned to the subject of athletics. His boxing and wrestling pictures are as revolutionary in their subject matter as his earlier rowing scenes.

In addition to oil painting, watercolor, and sculpture, Eakins experimented with photography in the 1880s and 1890s. Using a wooden view camera and glass plate negatives, he produced platinum prints of great tonal richness. The majority of his photographs are figure studies and portraits of students, family, and friends; most were created as independent works of art. In the few instances in which Eakins utilized his pictures as preparatory aids to painting, he rarely copied them directly. More typically, he took elements from a variety of photographs and transformed them into the final work.

Although Eakins sold fewer than thirty paintings and only had one solo exhibition in his lifetime, having lost prestige when he left PAFA, he exerted an incredible influence upon his students, many of whom became renowned artists. It was not until after Eakins’s death that scholars and critics began to recognize his role in the history of American art. Eakins died on June 25, 1916. In November 1917, The Metropolitan Museum of Art opened a memorial exhibition of sixty of his paintings. The Pennsylvania Academy followed a month later with a display of 139 works. By mid-century, Eakins had not only become a source of pride for Philadelphia but also a celebrated figure in the canon of American art history, widely praised for his meticulous working methods, a portrayal of everyday life, and influential, though controversial, teaching strategies. Considered one of the greatest American artists, he is represented in the collections of major museums across the country.

Thomas Cowperthwait Eakins (July 25, 1844 – June 25, 1916) was an American realist painter, photographer, sculptor, and fine arts educator. He is widely acknowledged to be one of the most important artists in American art history.

For the length of his professional career, from the early 1870s until his health began to fail some 40 years later, Eakins worked exactingly from life, choosing as his subject the people of his hometown of Philadelphia. He painted several hundred portraits, usually of friends, family members, or prominent people in the arts, sciences, medicine, and clergy. Taken en masse, the portraits offer an overview of the intellectual life of Philadelphia in the late 19th and early 20th centuries; individually, they are incisive depictions of thinking persons.

In addition, Eakins produced a number of large paintings which brought the portrait out of the drawing room and into the offices, streets, parks, rivers, arenas, and surgical amphitheaters of his city. These active outdoor venues allowed him to paint the subject which most inspired him: the nude or lightly clad figure in motion. In the process he could model the forms of the body in full sunlight, and create images of deep space utilizing his studies in perspective. Eakins also took a keen interest in the new technologies of motion photography, a field in which he is now seen as an innovator.

No less important in Eakins' life was his work as a teacher. As an instructor he was a highly influential presence in American art. The difficulties which beset him as an artist seeking to paint the portrait and figure realistically were paralleled and even amplified in his career as an educator, where behavioral and sexual scandals truncated his success and damaged his reputation.

Eakins was a controversial figure whose work received little by way of official recognition during his lifetime. Since his death, he has been celebrated by American art historians as "the strongest, most profound realist in nineteenth- and early-twentieth-century American art".

Eakins was born and lived most of his life in Philadelphia. He was the first child of Caroline Cowperthwait Eakins, a woman of English and Dutch descent, and Benjamin Eakins, a writing master and calligraphy teacher of Scots-Irish ancestry. Benjamin Eakins grew up on a farm in Valley Forge, Pennsylvania, the son of a weaver. He was successful in his chosen profession, and moved to Philadelphia in the early 1840s to raise his family. Thomas Eakins observed his father at work and by twelve demonstrated skill in precise line drawing, perspective, and the use of a grid to lay out a careful design, skills he later applied to his art.

He was an athletic child who enjoyed rowing, ice skating, swimming, wrestling, sailing, and gymnastics—activities he later painted and encouraged in his students. Eakins attended Central High School, the premier public school for applied science and arts in the city, where he excelled in mechanical drawing. Thomas met fellow artist and lifelong friend, Charles Lewis Fussell in high school and they reunited to study at the Pennsylvania Academy of the Fine Arts. Thomas began at the academy in 1861 and later attended courses in anatomy and dissection at Jefferson Medical College from 1864 to 65. For a while, he followed his father's profession and was listed in city directories as a "writing teacher". His scientific interest in the human body led him to consider becoming a surgeon.