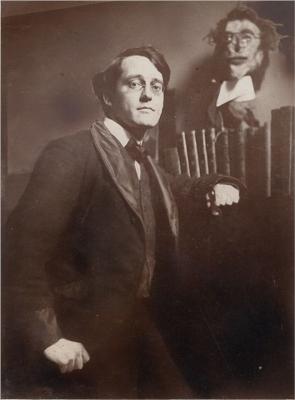 John French Sloan (August 2, 1871 – September 7, 1951) was a twentieth-century painter and etcher and one of the founders of the Ashcan school of American art. He was also a member of the group known as The Eight. He is best known for his urban genre scenes and ability to capture the essence of neighborhood life in New York City, often observed through his Chelsea studio window. Sloan has been called "the premier artist of the Ashcan School who painted the inexhaustible energy and life of New York City during the first decades of the twentieth century" and an "early twentieth-century realist painter who embraced the principles of Socialism and placed his artistic talents at the service of those beliefs."

John Sloan was born in Lock Haven, Pennsylvania, on August 2, 1871, to James Dixon Sloan, a man with artistic leanings who made an unsteady income in a succession of jobs, and Henrietta Ireland Sloan, a schoolteacher from an affluent family. Sloan grew up in Philadelphia, Pennsylvania, where he lived and worked until 1904, when he moved to New York City. He and his two sisters ( Elizabeth and Marianna) were encouraged to draw and paint from an early age. In the fall of 1884 he enrolled at the prestigious Central High School in Philadelphia, where his classmates included William Glackens and Albert C. Barnes.

In the spring of 1888, his father experienced a mental breakdown that left him unable to work, and Sloan became responsible, at the age of sixteen, for the support of his parents and sisters. He dropped out of school in order to work full-time as an assistant cashier at Porter and Coates, a bookstore and seller of fine prints. His duties were light, allowing him many hours to read the books and examine the works in the store's print department. It was there that Sloan created his earliest surviving works, among which are pen-and-ink copies after Dürer and Rembrandt. He also began making etchings, which were sold in the store for a modest sum. In 1890, the offer of a higher salary persuaded Sloan to leave his position to work for A. Edward Newton, a former clerk for Porter and Coates who had opened his own stationery store. At Newton's, Sloan designed greeting cards and calendars and continued to work on his etchings. In that same year he also attended a night drawing class at the Spring Garden Institute, which provided him his first formal art training.

He soon left Newton's business in quest of greater freedom as a freelance commercial artist, but this venture produced little income. In 1892, he began working as an illustrator in the art department of The Philadelphia Inquirer. Later that same year, Sloan began taking evening classes at the Pennsylvania Academy of the Fine Arts under the guidance of the realist Thomas Anshutz. Among his fellow students was his old schoolmate William Glackens.

In 1892, Sloan met Robert Henri, a talented painter and charismatic advocate of artistic independence who became his mentor and closest friend. Henri encouraged Sloan in his graphic work and eventually convinced him to turn to painting. They shared a common artistic outlook and in the coming years promoted a new form of realism, known as the "Ashcan school" of American art. In 1893, Sloan and Henri founded the short-lived Charcoal Club together, whose members would also include Glackens, George Luks, and Everett Shinn.