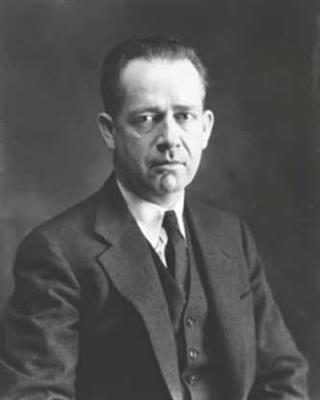 Charles Ephraim Burchfield (April 9, 1893 – January 10, 1967) was an American painter and visionary artist, known for his passionate watercolors of nature scenes and townscapes. The largest collection of Burchfield's paintings, archives and journals are in the collection of the Burchfield Penney Art Center in Buffalo. His paintings are in the collections of many major museums in the USA and have been the subject of exhibitions at the Metropolitan Museum of Art, the Whitney Museum of American Art, the Hammer Museum, and the Museum of Modern Art, as well as other prominent institutions.


Born in Ashtabula, Ohio, Burchfield was raised by his widowed mother in Salem, Ohio. Most of his early works were done at this house, where he lived from the ages of five to 28, and which has since been converted into a museum. While he did think of being a nature writer in high school, he eventually focused entirely on the visual aspect of his creativity, writing short descriptive pieces for the painting on the back of the mount. Stimulated by the nature descriptions of others, his preferred American writers were Thoreau and Willa Cather and later he developed a passion for reading works by Finnish writers describing nature.


Burchfield graduated from the Cleveland Institute of Art in 1916. Later in life he acknowledged the profound effect on his own development by a teacher at the CIA, the artist Henry Keller. Keller led a generation of Ohio watercolor painters of the Cleveland School which included Burchfield.


On becoming engaged, Burchfield moved to Buffalo, New York in 1921, where he was employed as a designer at the H.M. Birge wallpaper company. The following year he married Bertha Kenreich in Greenford, Ohio. In 1928 with a fifth child on the way, he approached artist-gallerist Frank Rehn to see whether he could afford to paint full-time by selling through the Rehn gallery in New York. Though the decision to leave Birge preceded the Great Depression works continued to sell. In 1952, he was elected into the National Academy of Design as an Associate member, and became a full member in 1954.


In 1925, Burchfield had moved from Buffalo to the adjacent suburb of West Seneca, New York, spending the rest of his life in the rural neighborhood of Gardenville. He is buried in Oakwood Cemetery in the Village of East Aurora, New York.


According to Burchfield's friend and colleague Edward Hopper, "The work of Charles Burchfield is most decidedly founded, not on art, but on life, and the life that he knows and loves best."
Burchfield has been more recently described as "the mystic, cryptic painter of transcendental landscapes, trees with telekinetic halos, and haunted houses emanating ectoplasmic auras." Jerry Saltz suggests his influences as van Gogh, Caspar David Friedrich, Marsden Hartley, John Marin, "calendar art, and Sunday painting." Like Hopper, he seemed to have left cubism out of the equation.


Since its heyday in the nineteenth century, watercolor had remained a popular style but Burchfield was unique among his major contemporaries for working exclusively within the medium. Unlike most watercolorists, he stood at an easel. He applied his colors with a "dry brush" technique (very little water) on machine-made paper, often reworking the surface during the process or sometimes many years later.