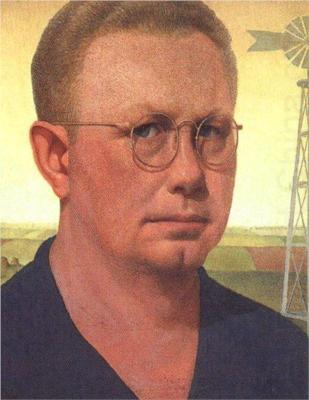 Wood was born in rural Iowa, 4 mi (6 km) east of Anamosa, in 1891. His mother moved the family to Cedar Rapids, after his father died in 1901. Soon thereafter, Wood began as an apprentice in a local metal shop. After graduating from Washington High School, Wood enrolled in The Handicraft Guild, an art school run entirely by women in Minneapolis in 1910 (now a prominent artist collective in the city). He is said to have later returned to the Guild to paint American Gothic. A year later, Wood returned to Iowa, where he taught in a rural one-room schoolhouse. In 1913, he enrolled at the School of the Art Institute of Chicago and performed some work as a silversmith.

From 1922 to 1928, Wood made four trips to Europe, where he studied many styles of painting, especially Impressionism and post-Impressionism. However, it was the work of the 15th-century Flemish artist Jan van Eyck that influenced him to take on the clarity of this technique and to incorporate it in his new works.

From 1922 to 1935, Wood lived with his mother in the loft of a carriage house in Cedar Rapids, which he turned into his personal studio at "5 Turner Alley" (the studio had no address until Wood made one up). In 1932, Wood helped found the Stone City Art Colony near his hometown to help artists get through the Great Depression. He became a great proponent of regionalism in the arts, lecturing throughout the country on the topic. As his classically American image was solidified, his bohemian days in Paris were expunged from his public persona.

Wood was married to Sara Sherman Maxon from 1935–38. Four years older than Grant, she was born in Iowa in 1887. Friends considered the marriage a mistake for Wood.

Wood taught painting at the University of Iowa's School of Art from 1934 to 1941. During that time, he supervised mural painting projects, mentored students, produced a variety of his own works, and became a key part of the University's cultural community. It is thought that he was a closeted homosexual, and that there was an attempt to fire him because of a relationship with his personal secretary. Critic Janet Maslin states that his friends knew him to be "homosexual and a bit facetious in his masquerade as an overall-clad farm boy." University administration dismissed the allegations and Wood would have returned as professor if not for his growing health problems.

The day before his 51st birthday, Wood died at the university hospital of pancreatic cancer. He is buried at Riverside Cemetery, Anamosa, Iowa.

When Wood died, his estate went to his sister, Nan Wood Graham, the woman portrayed in American Gothic. When she died in 1990, her estate, along with Wood's personal effects and various works of art, became the property of the Figge Art Museum in Davenport, Iowa.