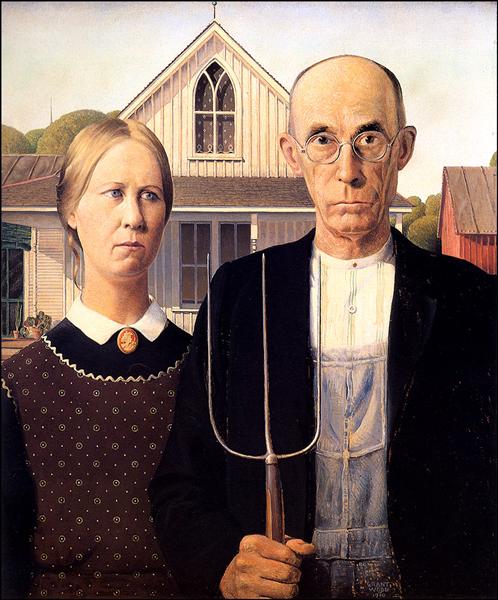 American Regionalism is an American realist modern art movement that included paintings, murals, lithographs, and illustrations depicting realistic scenes of rural and small-town America primarily in the Midwest and Deep South. It arose in the 1930s as a response to the Great Depression, and ended in the 1940s due to the end of World War II and a lack of development within the movement. It reached its height of popularity from 1930 to 1935, as it was widely appreciated for its reassuring images of the American heartland during the Great Depression. Despite major stylistic differences between specific Regionalist artists, Regionalist art in general was in a relatively conservative and traditionalist style that appealed to popular American sensibilities, while strictly opposing the perceived domination of French art.

Before World War II, the concept of Modernism was not clearly defined in the context of American art. There was also a struggle to define a uniquely American type of art. On the path to determining what American art would be, American artists rejected the modern trends emanating from the Armory Show and European influences particularly from the School of Paris. By rejecting European abstract styles, American artists chose to adopt academic realism, which depicted American urban and rural scenes. Partly due to the Great Depression, Regionalism became one of the dominant art movements in America in the 1930s the other being Social Realism. At the time, the United States was still a heavily agricultural nation with a much smaller portion of its population living in industrial cities such as New York City or Chicago.

American Scene Painting is an umbrella term for American Regionalism and Social Realism otherwise known as Urban Realism. Much of American Scene Painting conveys a sense of nationalism and romanticism in depictions of everyday American life. This sense of nationalism stemmed from artists rejection of modern art trends after World War I and the Armory Show. During the 1930s, these artists documented and depicted American cities, small towns, and rural landscapes; some did so as a way to return to a simpler time away from industrialization whereas others sought to make a political statement and lent their art to revolutionary and radical causes. The works which stress local and small-town themes are often called "American Regionalism", and those depicting urban scenes, with political and social consciousness are called "Social Realism".

American Regionalism is best known through its "Regionalist Triumvirate" consisting of the three most highly respected artists of America's Great Depression era, which included Grant Wood, Thomas Hart Benton, and John Steuart Curry. All three studied art in Paris, but devoted their lives to creating a truly American form of art. They believed that the solution to urban problems in American life and the Great Depression was for the United States to return to its rural, agricultural roots.

American painter from Anamosa, Iowa that was best known for his painting American Gothic. He also wrote a notable pamphlet titled Revolt Against the City, published in Iowa City, 1935. In it he asserts that American artists and buyers of art were no longer looking to Parisian culture for subject matter and style. Wood wrote that Regional artists interpret physiography, industry, and psychology of their hometown, and that the competition of these preceding elements creates American culture. He wrote that the lure of the city was gone, and hopes that art of the widely diffused "whole people" would prevail. He cites Thomas Jefferson's characterization of cities as "ulcers on the body politic."