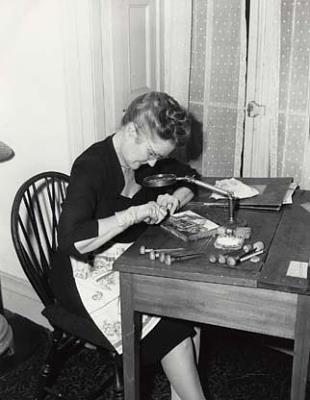 Grace Thurston Arnold Albee (July 28, 1890 – July 26, 1985) [1] was an American printmaker and wood engraver. During her sixty-year career life, she created more than two hundred and fifty prints from linocuts, woodcuts, and wood engravings. She received over fifty awards and has her works in thirty-three museum collections. She was the first female graphic artist to receive full membership to the National Academy of Design.

Albee was born in Scituate, Rhode Island to Henry Cranston Arnold and Susanne Arabella Thurston. Despite her father's resistance towards her artistic creativity, Albee was awarded two Saturday Scholarships to the Rhode Island School of Design (RISD) during her high school education at Providence, Rhode Island between 1906 and 1907. She entered the Rhode Island School of Design in 1908 and graduated in 1912. At RISD, Albee enrolled in the Department of Freehand Drawing and Painting, where she was recognized for her artistic achievements. [2]. Additionally, Albee learned the basics of woodcutting that would later lead to her artwork in printmaking. She married muralist Percy F. Albee on May 10, 1913 and gave birth to five sons over a period of nine years. Despite her role as a mother, Albee successfully balanced her time between her art and her domestic affairs.

Albee began making relief prints in 1915 when she and Percy created a staged puppet show called “Percy F. Albee Marionettes.” Albee crafted posters made from large linoleum in order to promote the show, which toured for the next eight years around Providence before permanently setting down in their house on Benefit Street. These earlier prints depicted the show’s marionettes during performance.

From 1915 to 1919, Albee entered a short four year hiatus from art to focus on motherhood.

In 1919 Albee returned to art and created one of her earliest linocuts “The Bath” (1919) and “In the Studio, Percy Albee” (1922). Additionally, the print “A Kitchen Window” was created as well. Besides large-scale prints, Albee also used linocuts to craft Christmas cards titled “Greetings from 102 George Street” (1921.)

In the 1920’s, Albee’s husband began focusing on arts involving linocuts, during which Albee was allowed to further experiment in her own lithography. Because of her husband’s interest, Albee was able to showcase her work in block-printing without seemingly interfering with her husband’s own artist career. In 1923 Albee submitted her works “In the Studio,” “The Bath”, and “A Kitchen Window” to the Providence Art Club’s Nineteenth Annual Exhibition of Little Pictures (All of her works were on sale for ten dollars.) Additionally, Albee and her husband experimented in printing colored linoleum blocks on silk, which gained them recognition from the Providence Journal in 1926. The collaborated works consisted of multi-colored, tapestry-like hangings that measured several feet in height and length. The technique required from Albee’s husband a year of practice so the color from the ink would not flake, fade, smear, or bleed into the silk. These works included a displayed image of “Grand Turk” (the American privateer from the War of 1812), a large map depicting the battle of Rhode Island in 1778, and a tapestry titled “Perch”. All the designs were cut by Albee herself. The tapestries were exhibited at the Providence Art Club in 1927 under Grace Albee’s name (not Percy Albee.).