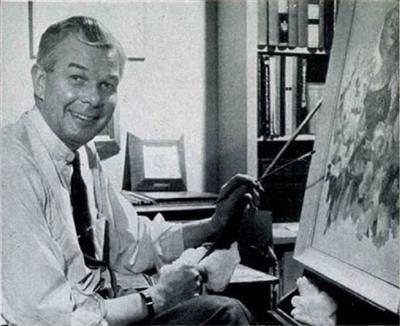 Haddon Hubbard "Sunny" Sundblom (June 22, 1899 – March 10, 1976) was an American artist of Finnish and Swedish descent and best known for the images of Santa Claus he created for The Coca-Cola Company. He used his own image for the famous Santa.


Sundblom was born in Muskegon, Michigan, to a Swedish-speaking family. His father, Karl Wilhelm Sundblom, came from the farm Norrgårds in the village of Sonnboda in Föglö, Åland Islands, then part of the Russian Grand Duchy of Finland now Finland, and his mother Karin Andersson was from Sweden. Sundblom studied at the American Academy of Art.


Sundblom is best remembered for his advertising work, specifically the Santa Claus advertisements he painted for The Coca-Cola Company starting in 1931. Sundblom's Claus firmly established the larger-than-life, grandfatherly Claus as a key figure in American Christmas imagery. So popular were Sundblom's images of Claus (Sundblom's images are used by Coca-Cola to this day) that Sundblom is often credited has having created the modern image of Santa Claus.


According to the Coca-Cola company: "For inspiration, Sundblom turned to Clement Clarke Moore's 1822 poem "A Visit From St. Nicholas" (commonly called "'Twas the Night Before Christmas"). Moore's description of St. Nick led to an image of Santa that was warm, friendly, pleasantly plump and human. For the next 33 years, Sundblom painted portraits of Santa that helped to create the modern image of Santa – an interpretation that today lives on in the minds of people of all ages, all over the world."


Sundblom is recognized as a major influence on many well known pin-up artists, such as Harold W. McCauley, Gil Elvgren, Edward Runci, Joyce Ballantyne, Art Frahm, and Harry Ekman. In the mid-1930s, he began to paint pin-ups and glamour pieces for calendars. Sundblom's last assignment, in 1972, was a cover painting for Playboy's Christmas issue which included a short bio with his photo.


"Sundblom gets pigeonholed as the painter of Coca-Cola Santa Clauses, but this trivializes his central place in 20th century advertising art. More than any artist including Norman Rockwell, Sundblom defined the American Dream in pictures, proved by his work for virtually the entire Fortune 500. [Among his still-living legacy is the Quaker Oats man, posed by his friend and colleague, Harold W. McCauley.]"