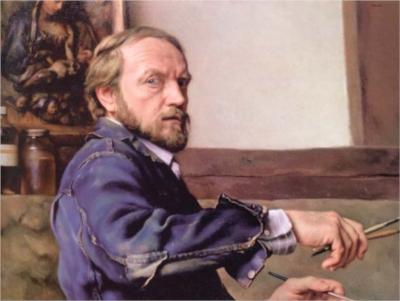 Shanks had been on the faculty of the Memphis Academy of Arts, the Art Institute of Chicago, the Art Students League of New York, the National Academy of Design and Studio Incamminati and was a resident of Andalusia, Pennsylvania. He was an honorary member of the American Society of Classical Realism Guild of Artists.

Shanks was a painter, teacher and art historian influential in the revival of classical realism in the United States. His portraits of royalty, politicians and celebrities added to his international profile as one of the foremost contemporary figurative painters. Shanks' philosophies and skills were shared through his teaching at various public and private institutions. In 2002, he founded Studio Incamminati in Philadelphia, Pennsylvania; an academy dedicated to the study, practice and spread of realist art using the philosophy and techniques espoused by Shanks.

Shanks was born in Rochester, New York. He lived in Wilmington, Delaware for most of his childhood. He studied at the Kansas City Art Institute and in New York City at the National Academy of Design and the Art Students League. At New York's Art Students League, he earned his tuition serving as a monitor in classes taught by Robert Brackman, Ivan Olinsky and Edwin Dickinson. He studied privately with John Koch and Henry Hensche. Grants from the Greenshields Foundation and the Stacey Foundation allowed him to study in Florence with Pietro Annigoni at the Accademia de Belle Arti. He then taught in Memphis, Chicago and Pennsylvania, where he maintained a studio for over three decades.

His portrait of Diana, Princess of Wales was completed in 1996. The painting was first shown at Hirschl & Adler Gallery in New York City, April 24 to June 28, 1996 and now hangs in the Princess's ancestral home at Althorp. His other commissions include John Paul II, President Ronald Reagan, President Bill Clinton, and Luciano Pavarotti.

His work has been exhibited in museums and galleries worldwide, including the National Gallery of Art in Washington, D.C., the Royal Palace in Stockholm, Kensington Palace in London and Fortezza Firmafede in Sarzana, Italy. During the summer and fall of 2011, he had solo exhibitions in Russia at the Russian Museum, St. Petersburg and the Russian Academy of Art, Moscow. He was one of two living American painters to have been invited to exhibit at either of these venues.

Other exhibition of Shanks' work at museums and galleries have included the National Academy of Design; Hirschl & Adler Galleries; Coe Kerr and FAR Galleries in New York; Dayton Art Institute; the Butler Institute of American Art; the Art Institute of Chicago; the Philadelphia Art Alliance; the New Jersey State Museum; the National Gallery of Art; the Philadelphia Museum of Art; Oklahoma University; the University of Pennsylvania; Temple University, Jefferson University, Johns Hopkins University; the College of William and Mary; the Allentown Art Museum, the Palmer Museum of Art; George Washington University; the University of the Arts; Oglethorpe University Museum; LaSalle University; the Royal Palace, Stockholm; Kensington Palace, London; and the historic Filoli Estate, California. A major one-man exhibition was held at the Pennsylvania Academy of the Fine Arts as well as the Hirschl & Adler exhibition, "Yanks Paint Brits." In August 2004, the city of Sarzana, Italy hosted a one-man exhibition entitled 'Dal Maestro'/'From the Master', in a fifteenth-century fortress called Fortezza Firmafede. The Woodmere Art Museum, Philadelphia, Pennsylvania, also hosted an exhibition 'Dal Maestro' in October, 2004, of more than fifty works by Nelson Shanks. In addition, his work is held in distinguished collections worldwide.