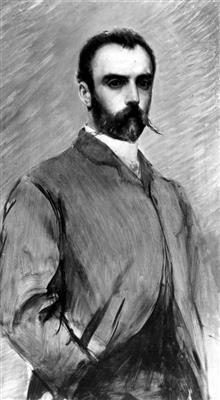 Luis Ricardo Falero (1851 – December 7, 1896), Duke of Labranzano, was a Spanish painter. He specialized in female nudes and mythological, oriental and fantasy settings. His most common medium was oil on canvas.


Falero was born in Granada and originally pursued a career in the Spanish Navy, but gave it up to his parents' disappointment. He walked all the way to Paris, where he studied art, chemistry and mechanical engineering. The experiments that he had to conduct in the latter two were so dangerous, however, that he decided to focus on painting alone. He was a student of Gabriel Ferrier. After Paris, he studied in London, where he eventually settled.


Falero had a particular interest in astronomy and incorporated celestial constellations into many of his works, such as "The Marriage of a Comet" and "Twin Stars". His interest and knowledge of astronomy also led him to illustrate the works of Camille Flammarion.


In 1896, the year of his death, Maud Harvey sued Falero for paternity. The suit alleged that Falero seduced Harvey when she was 17, first serving as his housemaid, and then model. When he discovered she was pregnant, he dismissed her. She won the case and was awarded five shillings per week in support of their child.


Falero died at University College Hospital, London, at the age of 45.