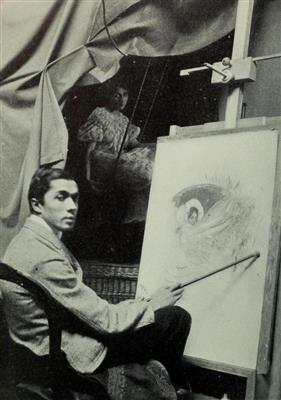 Frank Xavier Leyendecker (January 19, 1876 – April 18, 1924), also known as Frank James Leyendecker, was an American illustrator. He worked with his brother Joseph Christian Leyendecker, in their studio, first in Chicago, then later in New York City and New Rochelle, New York.

He was born in Germany on January 19, 1876, as Franz Xavier Leyendecker.

He studied for a time at the Académie Julian in France. He was known for his stained glass work as well as his illustrations for posters, magazines and advertisements. Leyendecker served as the judge in the first Strathmore Water Color Contest, sponsored by the Mittineague Paper Company of Massachusetts. His work was described as an "important feature" of the second exhibition of the Society of Illustrators at the International gallery in New York.

Leyendecker was suffering from depression and poor health due to his ongoing drug addiction, when he most likely committed suicide by morphine overdose on April 18, 1924, at the age of 48.