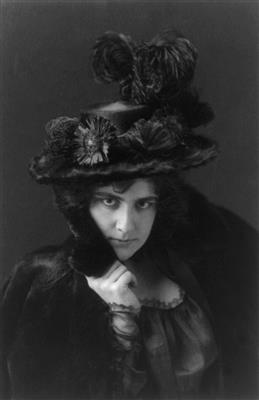 A photograph of Ethel Reed by Frances Benjamin Johnston (c.1895)

Ethel Reed (March 13, 1874 – 1912) was an internationally recognized American graphic artist. In the 1890s, her works received critical acclaim in America and Europe. In 2016 they were on exhibit in the Metropolitan Museum of Art and Museum of Modern Art in New York, the National Museum of American History in Washington, D.C., the Fine Arts Museums of San Francisco, the Frederick R. Weisman Art Museum of the University of Minnesota in Minneapolis, and the Nelson-Atkins Museum of Art in Kansas City.


Ethel Reed was born in Newburyport, Massachusetts, on March 13, 1874, she was the daughter of a local photographer and an Irish American mother and the daughter of Edgar Eugene Reed. Her father died when she was an adolescent, and Ethel and her mother consequently suffered hardship. After they moved to Boston in 1890, she studied briefly at the Cowles Art School in 1893, and after 1894 began to receive public notice for her illustrations. Reed's youthful beauty and cleverness caught the attention of a Newburyport artist Laura Hills, who became a mentor. During her time in Boston, she achieved national fame as a poster artist while still in her early twenties. She did many series of posters and book illustrations during a span of less than two years. In the mid-1890s she was engaged to fellow artist Philip Leslie Hale, whose father Edward Everett Hale was a prominent Bostonian. However, the engagement was broken off. In 1896, she traveled Europe with her mother. In 1897 they settled in London where Reed worked as an illustrator, in particular for the Yellow Book, a quarterly literary periodical, which was co-founded by Aubrey Beardsley. She had two children with different lovers.


She was acquainted with important literary and artistic figures of her day: the writer Richard le Gallienne, the architects Bertram Goodhue and Ralph Adams Cram, the photographer Fred Holland Day. Ethel Reed was the model for Day's photographs Chloe and The Gainsborough Hat. She also modeled at least three times for portraits by Frances Benjamin Johnston.


In her short career, Ethel Reed achieved recognition as one of the preeminent illustrator artists of her time and remains one of the most mysterious figures of American graphic design.


She later turned to drugs and alcohol after years of disappointment. Her circumstances in England are difficult to trace, and certain records of her final years have yet to surface. However, according to recent research, she died in her sleep in 1912. Her biographer has asserted that alcoholism and the use of sleeping medications contributed to her death.