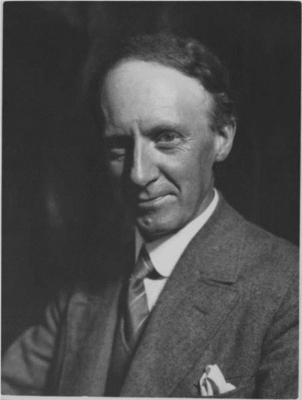 James Edward Hervey MacDonald (May 12, 1873 – November 26, 1932) was a Canadian artist and one of the founders of the Group of Seven who initiated the first major Canadian national art movement. He was the father of illustrator Thoreau MacDonald.

MacDonald was born on May 12, 1873 in Durham, England to an English mother and Canadian father, who was a cabinetmaker. In 1887 at the age of 14, he immigrated with his family to Hamilton, Ontario. That year he began his first training as an artist at the Hamilton Art School, where he studied under John Ireland and Arthur Heming. In 1889, they moved again to Toronto, where he studied commercial art and became active in the Toronto Art Student League. He continued his training at the Central Ontario School of Art and Design, where he studied with George Agnew Reid and William Cruikshank.

In 1895, MacDonald took a position as a commercial designer at Grip Ltd, an important commercial art firm, where he further developed his design skills. In the coming years, he encouraged his colleagues—including future artist Tom Thomson—to develop their skills as painters. In 1899, MacDonald married Joan Lavis, and two years later they had a son, Thoreau. MacDonald worked as a designer at Grip Ltd until 1903, then at Carlton Studio in London from 1903 to 1907, and returned to Grip Ltd in 1907. Whilst at Carlton, he worked with Norman Mills Price, William Tracy Wallace and Albert Angus Turbayne.

In 1911, MacDonald resigned his designer position at Grip Ltd and moved with his wife and child to Thornhill, Ontario to pursue a career as a landscape artist. To supplement his income, he worked occasionally as a freelance designer until 1921. After developing his own unique style to the genre, he organized a show of his work at the Arts and Letters Club of Toronto in November 1911. Fellow artist Lawren Harris—a member of the Royal Canadian Academy of Arts—was so impressed with MacDonald's work that he asked if they could work together. Harris encouraged MacDonald to continue painting and show his work whenever possible. The following year they organized their first joint exhibition. In 1912, MacDonald was widely recognized for his contributions to an exhibition at the Ontario Society of Artists.

In January 1913, MacDonald and Harris travelled to the Albright Art Gallery in Buffalo, New York, where they attended an exhibit of Scandinavian Impressionist landscape paintings. The two artists felt that the uninhibited approach to the northern Scandinavian wilderness could be adopted by Canadian painters to create on canvas a unique Canadian form of landscape art. Later that year, commercial artists based in Toronto began to show interest in the potential of original Canadian expression; these artists began to congregate around MacDonald and Harris. In the spring of 1913, MacDonald wrote to A. Y. Jackson, inviting him to come to Toronto, which he did in May.

In March 1916, MacDonald exhibited The Tangled Garden at the Ottawa Society of Artists. Though derided by art critics of the day, it was a fairly conventional post-impressionistic painting of sunflowers—one that has much in common with Van Gogh's treatment of the subject from nearly forty years before, but which Canadian critics rejected. Accustomed to the smooth blending and muted tones of Canadian academic art in the style of the Canadian Art Club, the critics were taken aback by the brightness and intensity of the colours. The art critic for the Toronto Daily Star called it "an incoherent mass of color". Hostile art critics thereafter singled out MacDonald for attacks in the press.