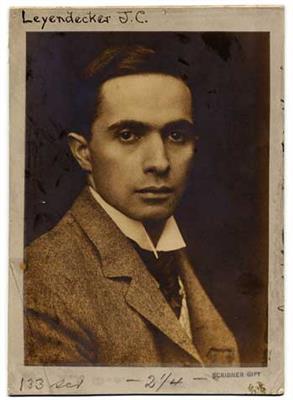 Joseph Christian Leyendecker (March 23, 1874 – July 25, 1951) was one of the preeminent American illustrators of the early 20th century. He is best known for his poster, book and advertising illustrations, the trade character known as The Arrow Collar Man, and his numerous covers for The Saturday Evening Post. Between 1896 and 1950, Leyendecker painted more than 400 magazine covers. During the Golden Age of American Illustration, for The Saturday Evening Post alone, J. C. Leyendecker produced 322 covers, as well as many advertisement illustrations for its interior pages. No other artist, until the arrival of Norman Rockwell two decades later, was so solidly identified with one publication. Leyendecker "virtually invented the whole idea of modern magazine design."

Joseph Christian Leyendecker ('J.C.' or 'Joe') was born on March 23, 1874, at Montabaur in Southwest Germany, a tiny village near the Rhine, to Peter Leyendecker (1838–1916) and Elizabeth Oreseifen Leyendecker (1845–1905). Joseph was the first-born son, and his brother Francis Xavier was born three years later. A sister, Augusta, the third and last child, arrived after the family emigrated to America.

In 1882, the Leyendecker family immigrated to Chicago, Illinois, where Elizabeth's uncle had founded the successful McAvoy Brewing Company. After working in late adolescence for a Chicago engraving firm, J. Manz & Company, and completing his first commercial commission of 60 Bible illustrations for the Powers Brothers Company, J. C. sought formal artistic training at the school of the Chicago Art Institute.

After studying drawing and anatomy under John H. Vanderpoel at the Chicago Art Institute, J. C. and younger brother Frank enrolled in the Académie Julian in Paris for a year, where they were exposed to the work of Toulouse-Lautrec, Jules Chéret, and also Alphonse Mucha, a leader in the French Art Nouveau movement.

In 1899, the Leyendecker brothers returned to America and set up residence in an apartment in Hyde Park, Illinois. They had a studio in Chicago's Fine Arts Building at 410 South Michigan Ave. On May 20 of that year, Joe received his first commission for a Saturday Evening Post cover – the beginning of his forty-four-year association with the most popular magazine in the country. Ultimately he would produce 322 covers for the magazine, introducing many iconic visual images and traditions including the New Year's Baby, the pudgy red-garbed rendition of Santa Claus, flowers for Mother's Day, and firecrackers on the 4th of July.

In 1900, Joe, Frank, and their sister Mary moved to New York City, then the center of the US commercial art, advertising and publishing industries. During the next decade, both brothers began lucrative long-term working relationships with apparel manufactures including Interwoven Socks, Hartmarx, B. Kuppenheimer & Co., and Cluett Peabody & Company. The latter resulted in Leyendecker's most important commission when he was hired to develop a series of images of the Arrow brand of shirt collars. Leyendecker's Arrow Collar Man, as well as the images he later created for Kuppenheimer Suits and Interwoven Socks, came to define the fashionable American male during the early decades of the twentieth century. Leyendecker often used his favorite model and partner Charles Beach (1881–1954).