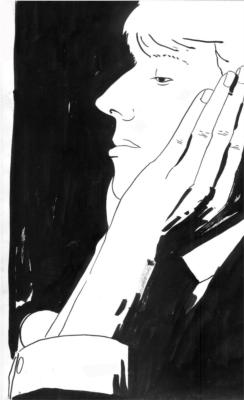 Beardsley was born in Brighton, England, on 21 August 1872, and christened on 24 October 1872. His father, Vincent Paul Beardsley (1839–1909), was the son of a tradesman; Vincent had no trade himself, and relied on a private income from an inheritance that he received from his maternal grandfather when he was 21. Vincent's wife, Ellen Agnus Pitt (1846–1932), was the daughter of Surgeon-Major William Pitt of the Indian Army. The Pitts were a well-established and respected family in Brighton, and Beardsley's mother married a man of lesser social status than might have been expected. Soon after their wedding, Vincent was obliged to sell some of his property in order to settle a claim for his "breach of promise" from another woman who claimed that he had promised to marry her. At the time of his birth, Beardsley's family, which included his sister Mabel who was one year older, were living in Ellen's familial home at 12 Buckingham Road. The number of the house in Buckingham Road was 12, but the numbers were changed years ago, and it is now 31.

In 1883 his family settled in London, and in the following year he appeared in public as an "infant musical phenomenon", playing at several concerts with his sister. In January 1885 he began to attend Brighton, Hove and Sussex Grammar School, where he would spend the next four years. His first poems, drawings, and cartoons appeared in print in "Past and Present", the school's magazine. In 1888 he obtained a post in an architect's office, and afterwards one in the Guardian Life and Fire Insurance Company. In 1891, under the advice of Sir Edward Burne-Jones and Pierre Puvis de Chavannes, he took up art as a profession. In 1892 he attended the classes at the Westminster School of Art, then under Professor Fred Brown.

In 1892, Beardsley travelled to Paris, where he discovered the poster art of Henri de Toulouse-Lautrec, and the Parisian fashion for Japanese prints, both of which would be major influences on his own style. Beardsley's first commission was Le Morte d'Arthur by Thomas Malory (1893), which he illustrated for the publishing house J. M. Dent and Company.

His six years of major creative output can be divided into several periods, identified by the form of his signature. In the early period his work is mostly unsigned. During 1891 and 1892 he progressed to using his initials, A.V.B. In mid-1892, the period of Le Morte d'Arthur and The Bon Mots he used a Japanese-influenced mark which became progressively more graceful, sometimes accompanied by A.B. in block capitals. He co-founded The Yellow Book with American writer Henry Harland, and for the first four editions he served as Art Editor and produced the cover designs and many illustrations for the magazine. He was also closely aligned with Aestheticism, the British counterpart of Decadence and Symbolism. Most of his images are done in ink and feature large dark areas contrasted with large blank ones, and areas of fine detail contrasted with areas with none at all.