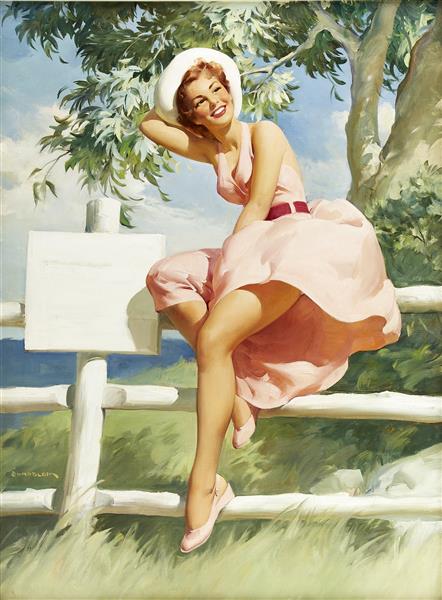 A pin-up model (known as a pin-up girl for a female and less commonly male pin-up for a male) is a model whose mass-produced pictures see wide appeal as popular culture. Pin-ups are intended for informal display, i.e. meant to be "pinned-up" on a wall. Pin-up models may be glamour models, fashion models, or actors. These pictures are also sometimes known as cheesecake photos. Cheesecake was an American slang word, that was considered a publicly acceptable term for seminude women because pin-up was considered taboo in the early twentieth century.


The term pin-up may refer to drawings, paintings, and other illustrations as well as photographs (see the list of pin-up artists). The term was first attested to in English in 1941; however, the practice is documented back at least to the 1890s. Pin-up images could be cut out of magazines or newspapers, or on a postcard or lithograph. Such pictures often appear on walls, desks, or calendars. Posters of pin-ups were mass-produced, and became popular from the mid 20th century.


Male pin-ups were less common than their female counterparts throughout the 20th century, although a market for homoerotica has always existed as well as pictures of popular male celebrities targeted at women or girls. Examples include James Dean and Jim Morrison.


Beginning in the early nineteenth century, pin-up modeling had "theatrical origins", burlesque performers and actresses sometimes used photographic advertisement as business cards to advertise shows. These adverts and business cards could often be found backstage in almost every theater's green room, pinned-up or stuck into "frames of the looking-glasses, in the joints of the gas-burners, and sometimes lying on-top of the sacred cast-case itself." Understanding the power of photographic advertisements to promote their shows, burlesque women self-constructed their identity to make themselves visible. Being recognized not only within the theater itself but also outside challenged the conventions of women's place and women's potential in the public sphere. "To understand both the complicated identity and the subversive nature of the 19th-century actress, one must also understand that the era's views on women's potential were inextricably tied to their sexuality, which in turn was tied to their level of visibility in the public sphere: regardless of race, class or background, it was generally assumed that the more public the woman, the more 'public,' or available, her sexuality, according to historian Maria Elena Buszek. Being sexually fantasized, famous actresses in early 20th-century film were both drawn and photographed and put on posters to be sold for personal entertainment. Among the celebrities who were considered sex symbols, one of the most popular early pin-up girls was Betty Grable, whose poster was ubiquitous in the lockers of G.I.s during World War II.


In Europe, prior to the First World War, the likes of Fernande Barrey (aka "Miss Fernande"), were arguably the world's first pin-ups as is known in the modern sense. Miss Barrey displayed ample cleavage and full frontal nudity. Her pictures were cherished by soldiers on both sides of the First World War conflict.


Other pin-ups were artwork depicting idealized versions of what some thought a particularly beautiful or attractive woman should look like. An early example of the latter type was the Gibson girl, a representation of the New Woman drawn by Charles Dana Gibson. "Because the New Woman was symbolic of her new ideas about her sex, it was inevitable that she would also come to symbolize new ideas about sexuality." Unlike the photographed actresses and dancers generations earlier, fantasy gave artists the freedom to draw women in many different ways. The 1932 Esquire "men's" magazine featured many drawings and "girlie" cartoons but was most famous for its Vargas girls. Prior to World War II they were praised for their beauty and less focus was on their sexuality. However, during the war, the drawings transformed into women playing dress-up in military drag and drawn in seductive manners, like that of a child playing with a doll. The Vargas girls became so popular that from 1942–46, owing to a high volume of military demand, "9 million copies of the magazine-without adverts and free of charge was sent to American troops stationed overseas and in domestic bases." The Vargas Girls were adapted as nose art on many World War II bomber and fighter aircraft; Generally, they were considered inspiring, and not seen negatively, or as prostitutes, but mostly as inspiring female patriots that were helpful for good luck.