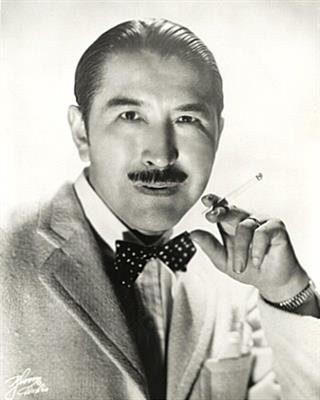 Joaquin Alberto Vargas y Chávez (9 February 1896 – 30 December 1982) was a noted Peruvian painter of pin-up girls. He is often considered one of the most famous of the pin-up artists. Numerous Vargas paintings have sold and continue to sell for hundreds of thousands of dollars.


Born in Arequipa, Peru, he was the son of noted Peruvian photographer Max T. Vargas. Alberto Vargas moved to the United States in 1916 after studying art in Europe, Zurich, and Geneva prior to World War I. While he was in Europe he came upon the French magazine La Vie Parisienne, with a cover by Raphael Kirchner, which he said was a great influence on his work.


His early career in New York included work as an artist for the Ziegfeld Follies and for many Hollywood studios. Ziegfeld hung his painting of Olive Thomas at the theater, and she was thought of as one of the earliest Vargas Girls. Vargas' most famous piece of film work was for the poster of the 1933 film The Sin of Nora Moran, which shows a near-naked Zita Johann in a pose of desperation. The poster is frequently named one of the greatest movie posters ever made.


He became widely noted in the 1940s as the creator of iconic World War-II era pin-ups for Esquire magazine known as "Varga Girls." Between 1940 and 1946 Vargas produced 180 paintings for the magazine. The nose art of many American and Allied World War II aircraft was inspired and adapted from these Esquire pin-ups, as well as those of George Petty, and other artists.


In 2004, Hugh Hefner, the founder and Editor-in-Chief of Playboy, who had previously worked for Esquire, wrote: "The US Post Office attempted to put Esquire out of business in the 1940s by taking away its second-class mailing permit. The Feds objected, most especially, to the cartoons and the pin-up art of Alberto Vargas. Esquire prevailed in the case that went to the Supreme Court, but the magazine dropped the cartoons just to be on the safe side". A legal dispute with Esquire over the use of the name "Varga" resulted in a judgement against Vargas. He struggled financially until 1959 when Playboy magazine began to use his work. Over the next 16 years he produced 152 paintings for the magazine. His career flourished and he had major exhibitions of his work all over the world.


Vargas' artistic work, paintings and color drawings, were periodically featured in some issues of Playboy magazine in the 1960s and 1970s.


The death of his wife Anna Mae in 1974 left him devastated, and he stopped painting. Anna Mae had been his model and business manager, his muse in every way. The publication of his autobiography in 1978 renewed interest in his work and brought him partially out of his self-imposed retirement to do a few works, such as album covers for The Cars (Candy-O, 1979) and Bernadette Peters (Bernardette Peters, 1980; Now Playing, 1981). He died of a stroke on 30 December 1982, at the age of 86.