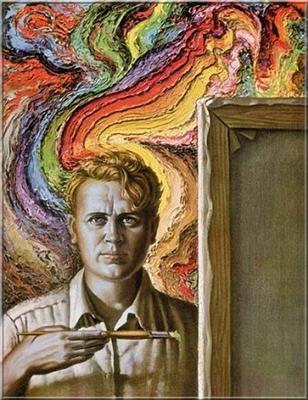 
Tretchikoff was a self-taught artist who painted realistic figures, portraits, still life, and animals, with subjects often inspired by his early life in China, Singapore and Indonesia, and later life in South Africa. While his work was immensely popular with the general public, it is often seen by art critics as the epitome of kitsch (indeed, he was nicknamed the "King of Kitsch"). He worked in oil, watercolour, ink, charcoal and pencil but is best known for those works turned into reproduction prints. According to his biographer Boris Gorelik, writing in Incredible Tretchikoff, the reproductions were so popular that it was rumoured that Tretchikoff was the world's richest artist after Picasso.


Vladimir Grigoryevich Tretchikoff was the youngest of eight children in a well-to-do family in Petropavlovsk (now Petropavl), a town in Siberia. Upon the Russian Revolution in 1917, the family abandoned their property and fled to Harbin, a city in China with a large Russian presence. Tretchikoff worked as a scene painter at the city's Russian opera house, and went to school until the age of 16. His work as a scene painter may explain why much of his later work is designed to be seen from a distance, and was presented with an inherent theatricality. A year previously, he was commissioned to paint portraits for the boardroom of the Chinese-Eastern Railway, and with the money from this commission he joined the community of Shanghai Russians.


In Shanghai, Tretchikoff worked as an art director and illustrator for Mercury Press, an American-owned advertising and publishing company. At the same time, he contributed cartoons to local Russian and English-language magazines. He met and married Natalie Telpougoff, a fellow Russian émigré. The couple moved to Singapore, where Tretchikoff worked for an advertising agency, gave art lessons, and contributed artwork to the Straits Times. International recognition came in 1937 when he was commissioned by the head of IBM, Thomas Watson, to represent Malaya in an exhibition of international art for which he produced the painting The Last Divers.


When the Second World War spread to the Pacific in 1940, Tretchikoff became a propaganda artist working for the British Ministry of Information. In February 1942, Tretchikoff was on board a ship evacuating ministry personnel to South Africa. The ship was bombed by the Japanese, and the 42 survivors rowed first to Sumatra, which they found was already occupied by the Japanese Army. They then rowed to Java, which took 19 days, only to find that it too was occupied. Tretchikoff was imprisoned in Serang (where he spent three months in solitary confinement for protesting that as a Russian citizen he ought to be set free), and then was released and spent the rest of the war on parole in Batavia, (now Jakarta), where he worked under supervision of a Japanese artist. Here he met Leonora Schmidt-Salomonson (Lenka) who became his lover and one of his most famous models.