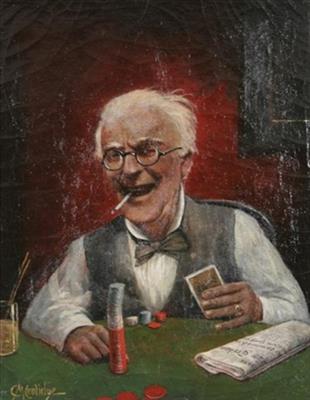 Cassius Marcellus Coolidge (September 18, 1844 – January 13, 1934) was an American artist, mainly known for his series of paintings Dogs Playing Poker. Known as "Cash" or "Kash" in his family, he often signed his work in the 19th century with the latter spelling, sometimes spelling his name, for comic effect, as Kash Koolidge.


Coolidge was born in Antwerp, New York to abolitionist Quaker farmers, and was raised in Philadelphia, New York.


He had little formal training as an artist.


After leaving the family farm in the early 1860s, Coolidge had many careers. Between 1868 and 1872 he worked as a druggist and sign painter, founded a bank and a newspaper, then moved from Antwerp, New York, to Rochester, where he started painting dogs in human situations.


Coolidge began his art career in his twenties, one of his early jobs being the creation of cartoons for a local newspaper.


He is credited with creating "comic foregrounds," novelty photographs which combined a portrait of the sitter with a caricatured body, produced by the sitter holding between two sticks a canvas on which Coolidge drew or painted the caricature, which he patented. The final product was similar to the photographs produced using photo stand-ins at midways and carnivals where people place their heads into openings in life-size caricatures.


According to the advertising firm Brown & Bigelow, then primarily a producer of advertising calendars, Coolidge began his relationship with the firm in 1903. From the mid-1900s to the mid-1910s, Coolidge created a series of sixteen oil paintings for them, all of which featured anthropomorphic dogs, including nine paintings of Dogs Playing Poker, a motif that Coolidge is credited with inventing.


The series of 16 commissioned paintings and their themes are:


Additional paintings in a similar vein include:


Named for the then-common pool-game Kelly pool, Coolidge's painting of dogs playing pool may be considered a progenitor of another memetic pop-culture art genre, that of "dogs playing pool."