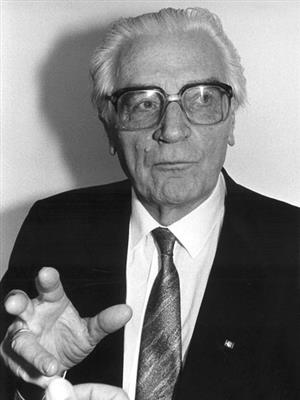 Konrad Zuse (German: [ˈkɔnʁat ˈtsuːzə]; 22 June 1910 – 18 December 1995) was a German civil engineer, inventor and computer pioneer. His greatest achievement was the world's first programmable computer; the functional program-controlled Turing-complete Z3 became operational in May 1941. Thanks to this machine and its predecessors, Zuse has often been regarded as the inventor of the modern computer.


Zuse was also noted for the S2 computing machine, considered the first process control computer. He founded one of the earliest computer businesses in 1941, producing the Z4, which became the world's first commercial computer. From 1943 to 1945 he designed the first high-level programming language, Plankalkül. In 1969, Zuse suggested the concept of a computation-based universe in his book Rechnender Raum (Calculating Space).


Much of his early work was financed by his family and commerce, but after 1939 he was given resources by the Nazi German government. Due to World War II, Zuse's work went largely unnoticed in the United Kingdom and the United States. Possibly his first documented influence on a US company was IBM's option on his patents in 1946.


Born in Berlin on 22 June 1910, he moved with his family in 1912 to East Prussian Braunsberg (now Braniewo in Poland), where his father was a postal clerk. Zuse attended the Collegium Hosianum in Braunsberg. In 1923, the family moved to Hoyerswerda, where he passed his Abitur in 1928, qualifying him to enter university.


He enrolled in the Technische Hochschule Berlin (now Technical University of Berlin) and explored both engineering and architecture, but found them boring. Zuse then pursued civil engineering, graduating in 1935. For a time, he worked for the Ford Motor Company, using his considerable artistic skills in the design of advertisements. He started work as a design engineer at the Henschel aircraft factory in Schönefeld near Berlin. This required the performance of many routine calculations by hand, which he found mind-numbingly boring, leading him to dream of doing them by machine.


Beginning in 1935 he experimented in the construction of computers in his parents' flat on Wrangelstraße 38, moving with them into their new flat on Methfesselstraße 10, the street leading up the Kreuzberg, Berlin. Working in his parents' apartment in 1936, he produced his first attempt, the Z1, a floating point binary mechanical calculator with limited programmability, reading instructions from a perforated 35 mm film. In 1937, Zuse submitted two patents that anticipated a von Neumann architecture. He finished the Z1 in 1938. The Z1 contained some 30,000 metal parts and never worked well due to insufficient mechanical precision. On 30 January 1944, the Z1 and its original blueprints were destroyed with his parents' flat and many neighbouring buildings by a British air raid in World War II.


Between 1987 and 1989, Zuse recreated the Z1, suffering a heart attack midway through the project. It cost 800,000 DM, (approximately $500,000) and required four individuals (including Zuse) to assemble it. Funding for this retrocomputing project was provided by Siemens and a consortium of five companies.