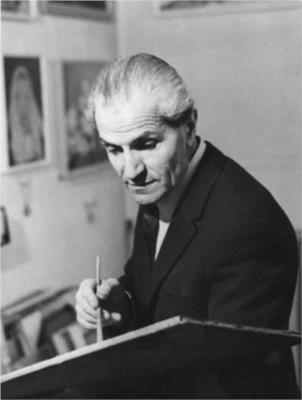 Babken Adamovich Kolozyan race. 21.02.1909 in Yerevan. After graduating from high school, he entered the Yerevan Art College, where he studied in the late 20's and early 30's.
He continued his education at the Leningrad Academy of Arts, in the studio of Professor A. Osmyorkin. After graduating from the Academy in 1938, in 1939 Babken Kolozyan moved to Yerevan, where he began teaching at the Yerevan Art College.
During his fruitful life, the artist created more than 1,000 paintings, leaving a bright trace in the Armenian painting of the twentieth century. Especially known for his still lifes and landscapes. Although in fairness I must say that his portraits are not inferior in their artistic credibility. During his life Babken Kolozyan participated in dozens of exhibitions, including personal (in 1948, 1959, 1966, 1981, 1989). In 2004 and 2009. held in Yerevan posthumous exhibition of the artist. The last exhibition was dedicated to the 100th anniversary of the birth of the artist.