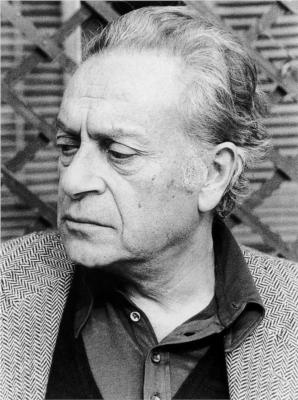 Renato Guttuso (26 December 1912 – 18 January 1987) was an Italian painter. His best-known works include Flight from Etna (1938–39), Crucifixion (1941) and La Vucciria (1974). Guttuso also designed for the theatre (including sets and costumes for Histoire du Soldat, Rome, 1940) and did illustrations for books. Those for Elizabeth David’s Italian Food (1954), introduced him to many in the English-speaking world. A fierce anti-Fascist, "he developed out of Expressionism and the harsh light of his native land to paint landscapes and social commentary."

He was born in Bagheria, near Palermo in Sicily, but from 1937 lived and worked largely in Rome. In his youth he joined the Gruppo universitario fascista, but later he became an anti-fascist and atheist. He joined the banned Italian Communist Party (PCI) in 1940 and left Rome to become an active participant in the partisan struggle from 1943. He was also an opponent to the Mafia. In 1972 Guttuso was awarded the Lenin Peace Prize. In 1976 he was elected to the Italian Senate as a PCI representative for the Sicilian constituency of Sciacca.

Renato Guttuso's father, Gioacchino Guttuso, was a land surveyor and amateur watercolourist. There are a number of portraits of Gioacchino in the collection donated to the mayor of Bagheria. Renato Guttuso began signing and dating his works at the age of thirteen. Guttuso lived close to a house amongst the Valguarnera villas and Palagonia, which he would soon represent in paintings inspired by the cliffs of Aspra.

In Palermo and in Bagheria Guttuso observed the dereliction of the 18th-century villas of the nobility, abandoned to decay as a consequence of political infighting within the municipal chambers. At the same time, his family suffered a period of economic stress because of the hostility shown by Fascists and clergy towards his father.

Guttuso went to Palermo for high school studies, and then to the University, where his development was modelled on the European figurative trends of the day, from Courbet to Van Gogh and to Picasso. In the early part of the 1930s, Guttuso was a frequent visitor to the studio of one of the most prolific futuristic painters, Pippo Rizzo. His works opened doors for him in Milan and to further travel throughout Europe.

As Guttuso's expressionism became stronger he painted more scenes of nature in flower, lemon trees, saracen olive trees, all in an environment suspended between myth and island insularity, that, when sent to the Quadriennale expo of 1931, he joined a collective of six Sicilian painters, acclaimed by the critic Franco Grasso as a "disclosure, a Sicilian affirmation". Back in Palermo Guttuso opened a studio in Pisani street and together with the painter Lia Pasqualino and the sculptors Barbera and Nino Franchina, formed the Gruppo dei Quattro (The Group of Four).

Guttuso became a member of an artistic movement named "Corrente". The movement stood for free and open attitudes, in opposition to the official culture, and chose a strong anti-fascist position in thematic choices through the years of the Spanish Civil War.