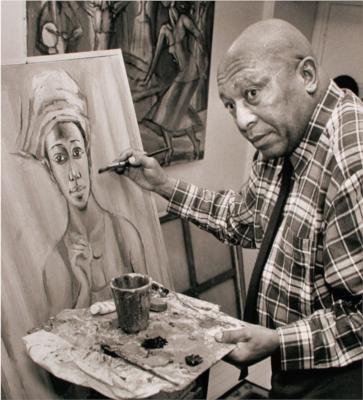 Gerard Sekoto (9 December 1913 – 20 March 1993), was a South African artist and musician. He is recognised as the pioneer of urban black art and social realism. His work was exhibited in Paris, Stockholm, Venice, Washington, and Senegal, as well as in South Africa.

Sekoto was born on 9 December 1913 at the Lutheran Mission Station in Botshabelo, near Middelburg, Eastern Transvaal (now known as Mpumalanga). As the son of a missionary, he experienced music as a part of his life and was introduced to the family harmonium at an early age.

His art skills emerged in his teenage years, when he attended the Diocesan Teachers Training College in Pietersburg. This school, unlike most, featured drawing classes and other craftwork. Grace Dieu had a number of skilled woodcarvers producing sculptures on commission as well as for competitions such as the annual South African Academy exhibition. The sculptor Ernest Mancoba was a close friend of Sekoto's at Grace Dieu, and the two dreamed of going to Europe to attend art school. Sekoto, though, never fit within the paternalistic, prescribed sculpting style at Grace Dieu, preferring to paint and draw on his own. On graduating as a teacher from the Diocesan Teachers Training College in Pietersburg he taught at a local school, Khaiso Secondary, for four years. During this time he entered an art competition (the May Esther Bedford) organised by the Fort Hare University, for which he was awarded second prize. George Pemba was awarded the first prize.

In 1938 at the age of 25 he left for Johannesburg to pursue a career as an artist. He lived with relatives in Gerty Street, Sophiatown. He held his first solo exhibition in 1939. In 1940 the Johannesburg Art Gallery purchased one of his pictures; it was to be the first picture painted by a black artist to enter a museum collection. In 1942 he moved to District Six in Cape Town, where he lived with the Manuel family. In 1945 he moved to Eastwood, Pretoria.

In 1947 he left South Africa to live in Paris under self-imposed exile. The first years in Paris were hard, and Sekoto was employed as a pianist purely by chance at l'Echelle de Jacob ("Jacob’s ladder"), a trendy nightclub that had reopened for business after World War II. Here he played jazz and sang "Negro spirituals", popular French songs of the period and some Harry Belafonte. Music became the way that he could pay his living and art school expenses.

Between 1956 and 1960, several of Sekoto’s compositions were published by Les Editions Musicales. Sekoto played piano and sang on several records. He composed 29 songs, mostly excessively poignant, recalling the loneliness of exile, yet displaying the inordinate courage of someone battling to survive in a foreign cultural environment.

Sekoto's paintings became political in the 1970s due to apartheid in his home country. In 1989 the Johannesburg Art Gallery honoured him with a retrospective exhibition and the University of Witwatersrand with an honorary doctorate.