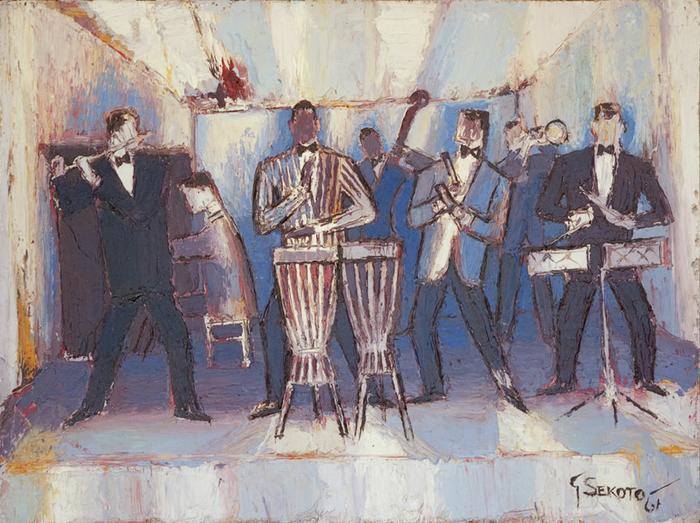 Sekoto’s first love was music, and after receiving a harmonium as gift from his father he taught himself to read music, and composed his own tunes from a very young age. The discovery of a whole collection of these self-composed songs in an old suitcase after Sekoto’s death, led to the production of a musical CD titled ‘The Blue Heads’ by The Sekoto Foundation under the guidance of Barbara Lindop. Paris, the “City of Light”, was a beacon of artistic freedom from the early 1920’s and lured thousands of artists, musicians and writers, many of whom were political or cultural exiles, to experience its cordial racial and artistic climate. Sekoto was one of these cultural asylum-seekers having left South Africa under self-imposed exile in 1947. Handicapped by being black, poor and not knowing the language or culture – an unknown artist painting in a cold, dark hotel room – Sekoto’s first years in Paris were a battle for survival.

Following World War II Boulevard St Germain, located on the Left Bank, across the Seine from the Tuileries, rivaled Boulevard Montparnasse as the intellectual center of Paris. There are few countries in the world to rival France in its respect for Jazz musicians and Jazz as an art form. By virtue of this, Sekoto was able to find employment at l’Echelle de Jacob (Jacob’s ladder) – one of Paris’ trendy nightclubs at the time – when the owner heard him play the piano at an audition he had stumbled upon. By using thick impasto brushstrokes to accentuate the rhythmic composition of angular shapes, Sekoto creates a visual beat in ‘Jazz Band’. His palette is dominated by grey and blue hues, recreating the smoky haze of the underground nightclub scene. The tight composition echoes the confined cellar space, and draws the viewer in as if seated at a table, nodding approvingly while listening to the live music.

Commenting on this painting, Sekoto said: I played for a students’ café, then various other bars where the clients had more money and where the French and tourists paid more. This is one of the St Germain nightclub cellars. The players are not my pals nor was the picture done on the spot . (Bibliography: Barbara Lindop, Gerard Sekoto , Randburg, 1988, pp 31 and 237)