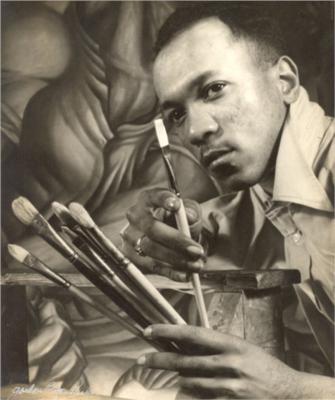 Charles Wilbert White (April 2, 1918 – October 3, 1979) was an American artist known for his WPA era murals. White's best known work is The Contribution of the Negro to American Democracy, a mural at Hampton University.

Charles Wilbert White was born on April 2, 1918, to Ethelene Gary, a domestic servant, and Charles White Sr, a railroad and construction worker, on the South Side of Chicago. Due to their poverty, his parents could not afford a babysitter while they worked, so his mother would leave him at the library. This caused a young Charles to develop an affinity towards art and reading at a young age. White's mother bought him an oil paint set when White was seven years old, which hooked White on art and painting. White also played music as a child, studied modern dance, and was part of theatre groups; however, he stated that art was his true passion.

White's mother brought the young White to the Art Institute of Chicago, where he would read and look at paintings—developing a particular interest in the works of Winslow Homer and George Inness. During the Great Depression, White tried to conceal his art passion in fear of embarrassment; however, this ended when White got a job painting signs at the age of fourteen. Since White had little money growing up, he often painted on whatever surfaces he could find including shirts, cardboard, and window blinds. White later learned how to mix paints by sitting in everyday for a week on an Art Institute of Chicago painting class that was taking place at a park near his home in Chicago. Ethelene re-married after White’s father passed away in 1926. She married a steel mill worker who would become an abusive alcoholic, especially towards a young White, leaving him to escape into art. This is also the same year Ethelene began sending him to Mississippi twice a year to his aunt Hasty Baines and Harriet Baines home, where he would learn about his heritage and Southern tales. This information would heavily influence his art for the rest of his career as an artist.

He won a grant during the seventh grade to attend Saturday art classes at the Chicago Art Institute. After reading Alain Locke’s “The New Negro”, a critique of the Harlem Renaissance, his social view changed. He learned after reading Locke’s text about important African American figures in American history, and questioned his teachers on why they were not taught to students in school, labeling him a “rebel problematic child”. White did not graduate from high school, having flunked a year due to his refusal to attend class after being disillusioned with the teaching system. He was encouraged by his art teachers to submit his art works and won various scholarships that would later be taken away from him as an “error” and given to a white child instead. Despite this, White received a full scholarship to be a full-time student at the Art Institute of Chicago. While in school, White cited Mitchell Siporin, Francis Chapin, and Aaron Bohrod as his influences. He was an excellent draftsman, completing five drawing courses and received a final "A grade". To pay the costs of materials in art school, White became a cook, using his mother's instruction and recipes. White later became an art teacher at St. Elizabeth Catholic High School to pay for his material costs. White also began working as a Works Progress Administration artist, and was later jailed for forming a union with fellow black artists who were being treated unfairly and wanted equal rights.